by mirjam — last modified 2016-11-28 06:04
Last night thirteen people who were arrested during the violent repression from riot police in the Korean owned company SAE-Technotex SA in June in Nicaragua were found guilty and face three years in prison. Monday the sentence will be announced. 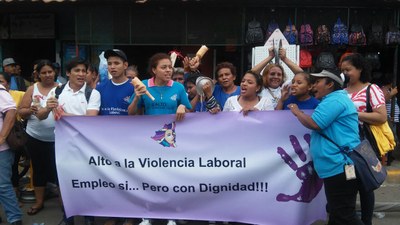 Clean Clothes Campaign strongly condemns this act of the Nicaraguan government who in a display of violence in response to the call of the Walmart supplier Korean-owned company SAE - A Technotex SA, on June 27, 2016 sent the riot policy into their factory to repress a peaceful workers' protest for improved workers conditions, such us drinking water, realistic production targets, and the reinstatement of two unionised workers.

This is not the first incident of violence linked to this company. In a 2013 April report of the Commission to Verify Codes of Conduct (COVERCO) commissioned by Fair Labour Association another incident of violence involving SAE A Technotex SA on March 4, 2013 was recorded.

The present case creates a precedent of unacceptable repression to unionist in the free zones of the region and is inconsistent with the current policy of collaboration between South Korea and Nicaragua, which, through the recent signing of a free trade agreement, is intended to improve the economic and labor conditions of all women and men workers operating in the free trade zones of the region.

Despite the unreasonable violence directed at workers by the riot police, as video footage vividly shows, and the fact that the company has finally decided to drop charges, the Nicaraguan state has filed charges against the workers, and they now face trial.

Therefor, Clean Clothes Campaign (CCC) joins the call of MEC, the affected workers and their families, to demand to the State of Nicaragua to:

We remain hopeful that the Government of Nicaragua will end unjust actions against its own citizens and put the protection of human and labor rights of the Nicaraguan workers above any other commercial consideration or corporate interest.

Please support this action by sending this letter (esta carta) to the Diplomatic representation of your country in Nicaragua.