by mirjam — last modified 2016-10-12 20:36
Update 12 Oct 2016: Today, four days prior to the Amsterdam marathon of which Mizuno is the main sponsor, Mizuno responded negatively to the request of Clean Clothes Campaign to meet the union and settle the case with the workers, instead referring to the Indonesian group Panarub claiming the case is closed. In light of Mizuno's refusal, CCC continues to mobilise their supporters to urge Mizuno to settle the case. 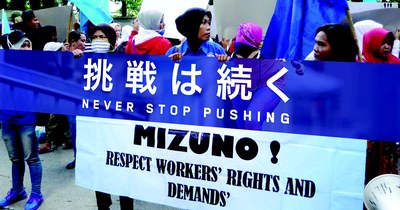 Mirjam van Heugten from CCC says: 'The workers in Indonesia still protest in public to raise the problems they deal with after not receiving their severance payments. Panarub can not unilaterally decide to close a case and claim the union does not want to negotiate after refusing to come with an offer. Until both parties have agreed to an amount and the workers have received their payments, we will continue support the workers in their struggle.'

CCC also highlights that it is unacceptable to approach workers individually to try and reach a settlement.

SBGTS-GSBI union president Kokom Komalawati states : 'Companies have to accept and respect the collective process of the workers. Panarub would be undermining a collective process, in which workers agreed that GSBI-SBGTS would represent them. We call on Mizuno to take their responsibility and make sure the women get what they are owed.'Clean Clothes Campaign campaigners in Europe are getting together with groups in the United States, Indonesia, Japan and Hong Kong to tell Japanese sports brand Mizuno they will #NeverStopPushing until Mizuno makes sure 346 Indonesian workers receive their fair severance payment after being unfairly dismissed in 2012. The groups urge Mizuno to meet the union representing the workers on Thursday 13 October. Some of the women, who have been working for years on Mizuno sportswear, lost their homes and families after the factory producing for Mizuno unfairly dismissed them. Adidas, another buyer from the same company, also refuses to support the workers financially.

The factory dismissing the group of mostly female workers, PT Panarub Dwikarya Benoa, was a primary supplier to Mizuno for years. The global brand adidas is a long term buyer from the Panarub Group, and the factory PDK was used as subcontractor to produce adidas shoes. Some of the women stitched shoes for Panarub for over 5 years.

Actions are taking place across continents, at Mizuno offices, shops and running events. SBGTS-GSBI union president Kokom Komalawati states: "It is clear that without involvement of the buyers Mizuno and adidas, Panarub will not propose a reasonable and fair amount, and not settle the case. We therefore expect from Mizuno, whose website claims Fairness in Business Practices through creating a corporate climate that does not condone unfair acts, to finally take up their responsibility and contribute to the resolution of this case."

The issue started when in July 2012 a group of 1300 mostly female workers was fired from the PT Panarub Dwikarya Benoa factory (PDK) after a strike demanding the right to freedom of association, a back payment of the legal minimum wage and improvement of the health and safety conditions in the factory. The women also suffered from verbal and physical violence. Early 2012 workers founded the union SBGTS-GSBI. When in July 2012 factory management unilaterally decided to postpone negotiations regarding wage violations, the workers started a spontaneous protest, followed by a strike which was joined by 2000 workers. After five days of strike, the factory management dismissed the workers.

Since 2012, adidas and Mizuno have not brought a solution closer. The workers still get together regularly and keep calling for a fair severance payment. On the 8th of August, Panarub called for a meeting the next day, giving the union no time to prepare and made no offer or movement in the negotiation meeting. After the meeting, Panarub is said to have approached several workers individually with an offer that is inadequate. Despite their hardship, all the workers refused.

Call on Mizuno's facebook to come to settle with the 346 workers. You could ask: @MizunoRunningUK when will you settle the case of the 346 women who were infairly dismissed and pay them what they are owed?”