What happened to the workers in Indonesia?

by mirjam — last modified 2016-10-10 11:37
Read the insights about the 346 women and men in Indonesia demanding fair compensation from sportswear brands Mizuno and adidas, after they were intimidated and lost their jobs in 2012. 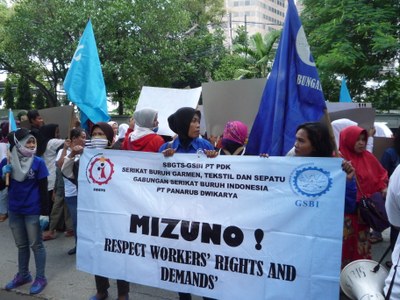 In July 2012 a group of 1300 mostly female workers was fired from the PT Panarub Dwikarya Benoa factory (PDK) after a strike demanding the right to freedom of association and a back payment of the legal minimum wage. Early in 2012 workers had founded the union SBGTS-GSBI, protesting against the factory’s failure to implement the agreed minimum wage. In July 2012 after the union SBGTS-GSBI's requests for negotiations about the wage violations were unilaterally postponed by the factory's management a spontaneous worker protest started, followed by a strike joined by 2000 workers. After 5 days of strike, PDK management dismissed the workers claiming the strike was illegal.

How are adidas and Mizuno involved?

PT Panarub Dwikarya Benoa was a primary supplier to Mizuno for years. The global brand adidas is a long term buyer from the Panarub Group, and the factory PDK was used as subcontractor to produce adidas shoes.

Towards the end of the strike, the workers went to the offices of adidas to demand their intervention. At that time adidas reportedly promised that workers could return to the factory the next workday, and that negotiations between the union and PDK management should be resumed. Nevertheless, workers report that when they returned they were intimidated by management.

After being contacted by the Play Fair Alliance (consisting of Clean Clothes Campaign, the International Trade Union Confederation and IndustriALL), Mizuno started its own investigation into the case. However, no concrete action resulted from this investigation.

Since 2012, adidas and Mizuno have not brought a solution closer, leaving the workers with no other option but to continue their struggle.

On the 29 February 2016, Mizuno refused to engage in negotiations to reach a settlement in this case, despite the fact that the workers had reduced their demand to one third of their original claim.

On 8 August 2016, Panarub called for a meeting with the union the next day, giving the union no time to prepare. Panarub made no signifcant offer and is said to have followed up on the meeting by offering several workers less than 500 EUR for a settlement. All workers refused.

How many workers are still fighting for compensation and what are their demands?

Of the 1300 dismissed workers in 2012, 346 workers are still fighting against their dismissals, and continuing their struggle for a fair severance payment, supported by their union SBGTS-GSBI. The other 954 workers agreed to be paid off with a meager ransom, which they accepted under pressure of the factory management and the hardship of lack of income.

Between November 2012 and August 2013 all PDK workers (employed and dismissed) have received the legally due wage increments (the difference between the wages received and the legal minimum wage), which was the primary demand of the striking workers in July 2012 and proves the legitimacy of the reason for the strike.

The demands of the 346 workers are:

- payment of full severance package and wages until the official closure of the factory. When PDK closed its Benoa factory in December 2013, all still employed workers received two times the legal severance payments, consisting of severance, gratuity and benefits, while the dismissed workers had not received any payment upon their dismissal. They continue to struggle for fair compensation, but to resolve the case and reach a settlement with Mizuno and Panarub Group, they considerably lowered their financial demands.

Why do the workers demand a settlement from the sportswear brands and Panarub Group?

The former PDK workers demand a settlement which should provide fair severance payments compensating for their unfair dismissal. They are addressing Mizuno, adidas and Panarub Group as both the brands and the factory owners profited directly from their labour. The trade union has estimated that the 1300 workers have produced more than 6 billion $ worth on shoes, throughout the average of 5 years that they have worked in this factory.

Thus far Panarub Group only offered the workers one or two months severance payment, despite the fact that workers had been employed up to 7 years. The offered amount does not come near full severance under Indonesian law, which for these workers should be at least 6 to 11 months and 15% benefits.

Was the strike “illegal”?

PDK dismissed the workers stating the strike was “illegal”. However, only the court can judge whether a strike is illegal and PDK never went to the court to establish the illegality of the strike.

In a statement published on 14 August 2012, adidas confirmed that illegality of a strike ' '[…] is not a matter which the factory itself can determine'. They state: 'With respect to workers being dismissed on the grounds of illegal strike action, it is the adidas Group’s view that such a determination can only be made by a properly constituted court. In the case of Indonesia, this would be the Industrial Court which hears labour disputes.'1

Indonesian law indeed has several restrictions on the right to strike, including the provision that workers can only strike after negotiations have failed, the labour department has mediated between the parties, and the strike is announced 7 days in advance. This has been criticized internationally, as it unnecessarily restricts workers in engaging in strikes for legitimate causes, while giving employers and authorities ample space to delay strikes. The necessity to announce strikes in advance incurs further risks for workers, as Indonesian unions report that after announcing a strike, management often engages in intimidation of workers and union members to prevent the strike from happening. Finally, ITUC mentions in their annual survey of violations of trade union rights2, that there are excessive civil or penal sanctions for workers and unions involved in non-authorised strike actions.

Prior to the strike the union had raised the issue of unpaid wage increments with the relevant authorities, as well as management. Although meetings were scheduled with management to negotiate, these meetings did not result in any outcome, and the last meeting before the strike was unilaterally canceled by management. This resulted in a spontaneous work protest of the majority of the workers. Following this spontaneous protest, the union immediately announced the strike to the management and the relevant authorities.

What did other institutions and the Indonesian government state about the case?

After the strike, various Indonesian institutions, including the National Commission on Human Rights (Komnas HAM), the National Commission for Women, the Ministry of Women Empowerment and Child Protection and the Minister of Manpower and Transmigration have condemned the unilateral dismissal of the 1,300 workers and expressed that PT Panarub Dwikarya should ensure labour rights are upheld for these fired workers, including the right to back pay of wages and other benefits. PDK has not respected any of these recommendations.

What were the working conditions at PDK?

In addition to the refusal of management to pay the full minimum wage, there were more labour rights violations reported by the PDK workers prior to the strike:

- late payment of wages: SBGTS-GSBI reports that the first time PDK workers were paid in 2012 was only in May, when the factory paid the wages for April and May, without paying the due wages for January-March.

- verbal abuse: In addition, the new production targets were supported by tighter working discipline enforced by the foremen and supervisors, who would verbally insult workers they considered too slow.

- unpaid forced overtime: everyday workers had to attend 10-20 minutes meetings before and after work, creating overtime that was neither registered nor paid.

What forms of intimidation were the workers faced with?

Early in 2012 workers founded the union SBGTS-GSBI, protesting against the factory’s failure to implement the agreed minimum wage. Immediately union leaders started to be harassed and dismissed by the management, as reported by union president Kokom Komolawati.

When in July the strike broke out, harassment increased. Kokom Komalawati, president of the union SBGTS-GSBI, told CCC how police used tear gas against the striking workers, including pregnant women. She also says how local thugs, supervisors and management have attempted to force workers back to work and workers have been told that if they wanted to return to work they had to resign from the union, decline from being involved in strike actions and say they were forced to join the strike by her.

Since then the company reportedly continued to put pressure to workers and their families to settle their case with the company, under threat of losing their jobs at other factories. These and similar threats led to two thirds of the dismissed workers to settle for a considerably lower payment.

Why did mediation through National Mediation Board not work?

Adidas, after being addressed by the striking workers, pushed the union to agree to a mediation procedure at the National Mediation Board. However, according to the union, their supplier Panarub often did not show up during negotiations, and refused to genuinely engage in reaching a settlement. CCC strongly believes that the lack of serious involvement of Panarub buyers Mizuno and adidas is to blame for this failure.

Why is this case not resolved within the Freedom of Association protocol?

The –Indonesian Freedom of Association (FoA) protocol has been signed by adidas and PT Panarub Industry, a sister company of PDK, as well as the union federation GSBI, to which the PDK union SBGTS-GSBI is affiliated. However, the FoA protocol only covers first tier suppliers (i.e. directly delivering to the international brand/retailer). PDK was never a first tier supplier to adidas, but only a subcontractor to their direct supplier, and therefore adidas refused to resolve the case within this framework. Mizuno, which does have PDK as a first tier supplier, did not sign the FoA protocol.

Can the Global Framework Agreement between Mizuno and IndustriALL provide a solution?

In 2011 Mizuno and IndustriALL signed a Global Framework Agreement stipulating that Mizuno will create sound employment relationships within Mizuno and its companies, and put in place mechanisms for the solution and reduction of conflicts. IndustriALL supports the demand from the PDK workers to negotiate a settlement, and expects from Mizuno to engage in negotiations and financially contribute to a settlement.