by mirjam — last modified 2015-11-20 09:24
On the first day of a wave of international actions, Clean Clothes Campaign announces its support for the demand of a coalition of Cambodian unions that the multinational brands must ensure a minimum wage of US $177. Today, thousands of women and men in Cambodia and around the world, will wear stickers saying “brands must provide a living wage for workers!” in factories which produce apparel for major global brands such as H&M, Inditex, Levi's and GAP. 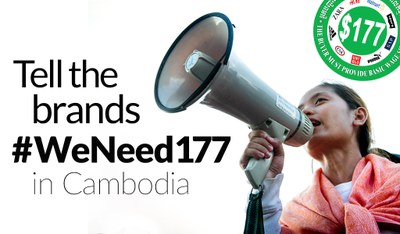 In October, the Labour Advisory Council (LAC), a tripartate wage-setting body, voted to approve a new minimum wage of $140, to be implemented in January 2016 for Cambodia’s 700,000 garment workers, despite objections from a number of unions. This insufficient $12 wage increase is a slap in the face to workers who have been organizing for over a year to demand a fair minimum wage of $177.

A coalition of Cambodian unions are joining together to demand that the brands immediately ensure a minimum wage of US $177 is paid in their Cambodian suppliers and negotiate directly with Cambodian unions a binding agreement to achieve living wages, decent purchasing practices, stable employment, and union rights for the long-term.

Some brands, such as H&M and Adidas, have made public statements that they support a living wage for workers in their supply chains. However, these assertions ring hollow to workers who often work excessive overtime and still cannot provide for the basic needs of themselves and their families.

Athit Kong, Vice President of C.CAWDU, an independent union in Cambodia, says: “This increase of $12 does not reflect the real basic needs of the workers, especially in light of the enormous profits of multinational brands. It is clear that the only solution to poverty wages in the garment industry is genuine collective bargaining between brands, as the principle employers, and the garment unions. Workers have been organizing for years for a living wage. We need $177 now!”

In addition to actions planned on November 20, CCC also supports the call for a Global Action Day on December 10th, International Human Rights Day. Workers and campaigners from all over the world will show support to the Cambodian workers with workplace actions, fashion mobs, catwalks, and other store actions.

Clean Clothes Campaign continues to support the women and men around the world who produce apparel for major multinational brands.

Mirjam van Heugten from Clean Clothes Campaign says: “Brands sourcing from Cambodia cannot expect the women and men working in their factories to accept these bread crumbs. The workers effectively slave themselves at factories, only for the brands to make huge profits. The targeted brands such as H&M and Inditex must put their leadership claims into practice by making sure all garment workers receive a living wage.”

Since late 2013 Cambodian workers have been demanding an increase in the minimum wage to a fairer wage of $177 in order to take crucial steps towards the payment of a living wage. In early January 2014, wage struggles escalated when police and military cracked down on wage protests and five people were murdered, 23 were arrested, and many others were injured.