Clean Clothes Campaign response to agreement between H&M and IndustriALL

by mirjam — last modified 2015-12-02 11:54
Clean Clothes Campaign welcomes the agreement which was recently signed between H&M and global workers federation IndustriALL, yet sees room for improvement for the Global Framework Agreement (GFA) which was also signed by Swedish trade union IF Metall. 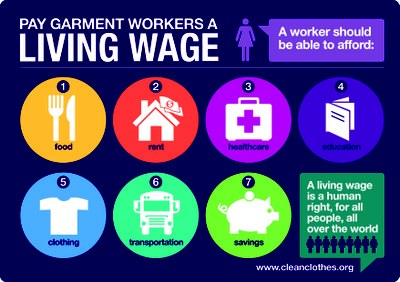 The GFA is supposed to strengthen trade union rights for all H&M workers throughout their supply chain. It is based on a number of ILO conventions and covers rights such as freedom of association and collective bargaining and the right to refuse unsafe work. In addition, it contains a paragraph on the right to a “Fair Living Wage”.  However, CCC sees improvements to be crucial for making the garment industry a fair working place for the women and men working for H&M's supplier factories.

According to IndustriALL, the agreement covers 1.6 million garment workers in the approximately 1,900 factories where H&M sources their merchandise.

The H&M GFA has no binding dispute resolution and only non-binding mediation in case the parties disagree on various issues. It is ambitious in its content but its success to achieve effective implementation will depend on the capacity and political will of the parties.

"We welcome any move from brands towards working constructively with trade unions for improved working conditions. We expect that the outcomes of this agreement will be measurable, transparent and regularly reported, so that the achievements can be clearly monitored,” says Mirjam van Heugten of Clean Clothes Campaign.

For years, H&M has communicated in its public statements it aims to pay a "fair living wage" to workers making its garments, but until now there is little evidence that wages have increased for the brand’s impoverished workers. The GFA is supposed to lay the ground for what H&M call a “Fair Living Wage” through collective bargaining. However, the new framework agreement merely focuses on supplier behavior and does not outline any concrete steps as to how the multinational retailer will contribute to substantially higher wages for their work force, e.g. by paying more for the garments in order to provide space for wage increases.

The right to form a trade union, to freedom of association and to collective bargaining are all emphasized throughout the document.

“By signing the Global Framework Agreement we expect H&M to abandon previous efforts to support the establishment of Worker Participation Committees as parallel means of worker representation. H&M should instead redirect all their efforts to ensure that workers’ right to organize in trade unions of their own choice is respected and that trade unions are not discriminated against when organizing the workforce at any of H&Ms suppliers,” says van Heugten.

Still the challenge remains as to how dialogue between workers trade union representatives and employers can develop to any scale in a sector where the unionization rate is very low, e.g.in Bangladesh only a few percent of garment workers are unionized. It will take long before voiceless workers dare speak up and regretfully the GFA lacks any promise of safe complaint mechanisms for H&M workers. Clean Clothes Campaign calls upon H&M to immediately demand and support the establishment of safe complaint mechanisms at their factories, starting with those without union presence.

The GFA states there will be set up so-called National Monitoring Committees in Bangladesh, Cambodia and Myanmar as a first step. The task of these committees is “to safeguard the implementation of the agreement from the factory floor upwards, and to facilitate dialogue between the parties on the labour market” according to IndustriALL. The parties, H&M and IndustriALL, will have two representatives each in the committee.

“If the parties are serious about true participation from the ground level, national trade unions ought to have representation in the monitoring committee as well”, says van Heugten.

The GFA will be evaluated after only one year. The success of the agreement will depend on whether H&M will go beyond signing a paper agreement and actually implement what they have committed to. Given the past experience we remain somehow hesitant regarding the outcome. H&M has signed the Bangladesh Accord to improve worker’s safety at factories after the Rana plaza catastrophy, but has failed to comply with its terms. Today, years after the signing of the Accord, 60% of H&M's supplier factories in Bangladesh still do not have safe fire exits. Clean Clothes Campaign foresees a thorough evaluation and recommitment to enforceable agreements that will result in workers from the lowest level empowered to engage in solutions with brands over measurable objectives.