by mirjam — last modified 2015-10-12 21:36
On the first day of the Living Wage Forum in Brussels, bringing together workers, labour leaders, academics and members of the CCC global Network, the right to a living wage was confirmed as a human right. At the forum, organised by Clean Clothes Campaign and held between 12 and 14 October, more than 200 workers, brands, policy makers and campaigners come together to commit to implement a living wage for all garment workers. 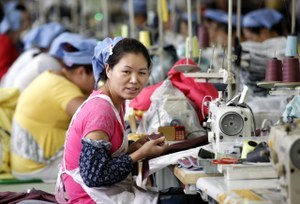 The testimonies presented today revealed the fact that poverty wages are commonplace throughout the supply chains of most big name brands in all producing countries Asia and beyond. Representatives from worker groups in Asia gave testimony showing how the majority of workers cannot even meet their basic needs.

Often we hear about the appalling wages of countries far away but today we also heard about the low wages facing workers in the Ukraine and Turkey as well as inside Europe – countries such as Romania and Bulgaria - where wages are even below those in China. In Italy, it was said that immigrant workers – often Chinese - spend their days in clandestine workshops producing for European consumers. Conditions are deteriorating and the pressure on wages is so prevalent that in Sri Lanka local workers are being replaced by Burmese immigrants at even lower wages.

Brands were accused of hiding behind the legality of paying the local minimum wage even though that wage cannot sustain a family. However, many participants made it clear that the right to a living wage is a fundamental human right, as it is enshrined in both UN laws and ILO Conventions. Several speakers; most notably Olivier De Schutter from the UN Committee on Economic, Social and Cultural right discussed the legislative possibilities for binding regulations ensuring companies live up to their responsibilities and outlined the steps needed to bring workers closer to a living wage.

The Asia Floor Wage Alliance spoke of their vision of a common floor wage for Asia which could reduce competition among producing countries in Asia and enable workers in Asia – making the majority of garments bought in Europe – to bring home wages capable of giving them and their families a decent life.

Mirjam van Heugten from Clean Clothes Campaign says: 'The struggle for a living wage is now a common struggle throughout Asia, Europe and beyond. The campaign has begun and the time is now ripe for success. Cambodian workers are engaged in a national struggle along with their counterparts throughout the region. The Clean Clothes Campaign is supporting these struggles - using all means possible including harnessing the growing consumer awareness and support for a living wage.'

This day's discussion at the Forum and the input of EU officials at the European Citizenship Prize 2015 ceremony, where CCC was handed the award by Sjerp van der Vaart and Ivo Belet confirms the role that international and European law has a major role to play for the implementation of the right to a living wage.

Tomorrow brands such as Inditex, H&M, C&A, Tchibo, Tesco, N Brown, New Look and Pentland will deliver their concrete steps to achieve a living wage in their supply chains.