UNIQLO under fire for factory closure after worker uprising

by paul — last modified 2015-12-03 13:01
UNIQLO, one of Asia's biggest fashion brands, has come under fire this month after one of its Chinese supplier factories, Artigas Clothing and Leather, shut down without notice and denied workers severance and social insurance payments. 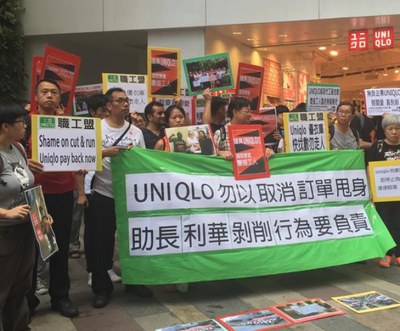 UPDATE: On 26th November, campaigners in Hong Kong demanded action after research published by our friends at SACOM showed Japanese fashion brand Uniqlo involved in numerous cases of labour rights violations. UNIQLO has not moved towards an agreement with the workers and we urge Uniqlo to settle the dispute immediately. You can download the report here: http://sacom.hk/uniqlorevisit/

CCC has been in contact with the owner company of the UNIQLO brand, Fast Retailing.
Read our second letter to them here.

The brand stands accused of repeatedly turning a blind eye to the malpractice at the supplier following strikes in February and allowing owners to shut the factory secretly removing equipment and machines and denying severance payments and social insurance owed to workers.

The dispute at the Artigas factory has been building for some time, after workers went on strike in February to demand their legally-mandated pension contributions arrears and other rights. Police were called in to break the strike and force workers to return to work. In June this then escalated when Artigas management removed equipment and machines from the factory without notice or negotiation with workers. A strike involving over 900 Artigas workers commenced on 9 June where workers occupied the factory plants around the clock to prevent factory management from secretly removing the rest of the equipment and machines from the premises. Some workers launched a hunger strike.

Workers expressed their wishes in open letters to the factory, demanding fair and collective negotiations with factory management to discuss and resolve the issue in a constructive manner. 108 Artigas workers traveled to Guangzhou, the capital city of Guangdong province, to send their petition to the province Bureau only to be violently sent back to Shenzhen by Shenzhen police a week later. Management of the Artigas factory have continued to ignore the situation and issued an official announcement on 8 July asking all Artigas workers to end their occupation of the factory, threatening to cut water and power supply and lock down the premises.

UNIQLO and its parent company Fast Retailing, issued a further statement on 17 June claiming to care about the issue faced by the workers and stating a commitment to human rights and appropriate working conditions at all of their manufacturing plants. However this statement has not yet been followed up with action to ensure workers making their products at Artigas are paid the severance payments and the social insurance contributions they are owed.

Global action is taking place throughout July to call on UNIQLO to act and resolve the labour dispute in the Artigas factory in China.

May Wong from Hong Kong-based Students and Scholars Against Corporate Misbehaviour (SACOM) gave the following comment: “Fast Retailing makes huge profits every year off Uniqlo’s sales, so should take responsibility for settling all payments still owed if these are beyond the factory's capacity. We urge Fast Retailing to stop making empty promises, to start taking real action to correct the malpractices of Artigas's parent company and to settle the labour dispute with respect to the workers.”