by mirjam — last modified 2015-07-13 12:56
The Clean Clothes Campaign expresses sadness and anger at the news of a tragic loss of life at a shoe factory that collapsed in east China last Saturday, and sends its heartfelt condolences to all the families affected. 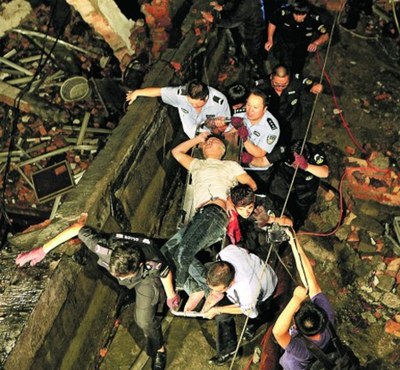 Latest reports suggest that between 6 and 14 workers were killed when the Jieyu Shoe Factory in east China's Zhejiang Province collapsed on Saturday, 5 July. 56 workers were in the shoe factory working when the four story building crumbled. Over 30 suffered serious injuries, and local fire and rescue teams are continuing to excavate the rubble to uncover bodies. The final cause of the building’s collapse is unclear, but large and heavy water tanks had been installed on the roof of the building and news sources have suggested that this could have contributed.

It remains unclear which international brands were sourcing from the factory, but the area is a well-known shoe production hub. According to the local government tourism board, Wenling town, where the factory was located, produces ‘one fifth of the world's shoes’.

The collapse comes in the wake of continuing health and safety failures in the garment and shoe industry, after the Rana Plaza disaster elevated the concern to an international stage in 2013. Clean Clothes Campaign are repeating the call for the industry on a global level to learn from the mistakes of the past, and ensure that all workplaces making clothing and shoes provide safe and healthy working environments.

We urge all those connected to the factory to work together to provide compensation, lost wages and medical treatment to those families and individuals affected by this tragic incident.