Free Somyot: 4 years in jail for 'insulting the king'

by mirjam — last modified 2015-04-30 07:51
Today it has been four years since Thai editor and labour rights activist Somyot Pruksakaemsuk was arrested and imprisoned in Thailand, based on the lèse majesté law. CCC is concerned for his health and calls for his immediate release. 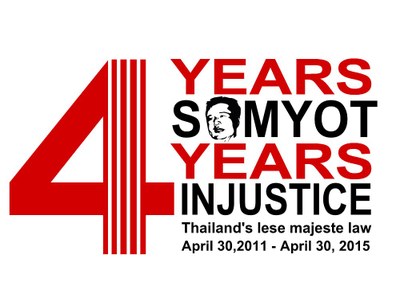 The abuse of the lèse majesté law to silence media and bloggers has intensified since the military coup in May 2014. It seriously undermindes the freedom of expression and threatens all Thai-citizens. Somyot needs to be released immediately.

Let our voices be heard and sign the petition here.

Somyot has worked with the CCC on numerous campaigns and Urgent Appeal cases. The charges against Somyot stem from two satirical articles, written by someone else, in the now-defunct magazine Voice of Taksin (Voice of the Oppressed), of which Somyot was the editor. Article 112 of the Criminal Code stipulates that “Whoever defames, insults or threatens the King, Queen, the Heir-apparent or the Regent, shall be punished with imprisonment of three to fifteen years.” However, just before his arrest, on 28 April 2011, Somyot had publicly launched a petition calling for the removal of lèse majesté from the Thai criminal code.

By April 30, 2015, Somyot will have spent four years behind bar, during which all 16 of his bail applications were rejected. Somyot suffers from gout and hypertension and there are serious concerns that the medical treatment he is receiving at Bangkok Remand Prison is not adequate.

Let our voices be heard and sign the petition!