by mirjam — last modified 2015-04-29 15:57
The Rana Plaza Global Day of Action on April 24 pushed brands to contribute several millions for the survivors of the Rana Plaza factory collapse. A last minute initiative secured additional donations to the Rana Plaza compensation fund, but despite this US$2.7 million is still needed. Clean Clothes Campaign calls on brands to fill the remaining funding gap by May Day. 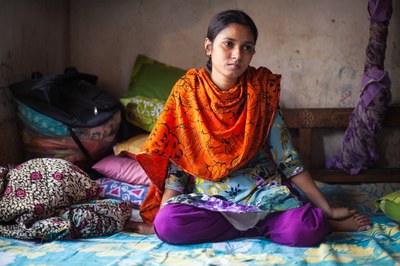 To commemorate the second anniversary of the Rana Plaza disaster, thousands of campaigners took action, demanding that all brands sourcing from Bangladesh fill the current funding gap in compensation, and sign the Bangladesh Accord on Fire and Building Safety. Major events and demonstrations in at least 20 countries worldwide called on Benetton, Mango, Inditex and other high street labels to make sure Bangladesh workers get the US$30 million they need.

The Global Day of Action included such events as a mass demonstration in Bangladesh, a concert of sewing machines in Italy, events outside stores including Mango, JC Penney, Zara, and Walmart in the US, and a flashmob outside stores in Germany and Belgium. Thousands more showed their support online, through facebook messages, sharing solidarity photos and tweets.

The urgency and need for full compensation grows with each passing day. Many survivors have had to use their entirety of their compensation payments to date on medical fees and are living in abject poverty, awaiting the final installments. To date, claimants have only received 70% of what they are owed.

For families and individuals the wait for compensation has had devastating effects, many have faced destitution and are unable to pay ongoing medical costs.

Asha Khat, who survived the disaster, was the main earner for her mother, father, and younger sister, and now the family is desperately struggling to get by. Asha has received compensation for her injuries, but says it’s only been enough to cover her medical costs. Two years after the collapse, Asha says she still can’t eat properly, and she feels pain in her head and chest. She is too weak to stand for long periods, so she no longer leaves the house. The two-year wait for compensation has fueled Asha with despair: “I feel like I’m living like a dead person. It would’ve been better if I died, because now I’m a burden to my family.”

There remains hope that brands and retailers will continue to step up and make additional contributions in order to fully fill the fund at $30 million, the amount required to provide the survivors and victims’ families with full and fair compensation.  Over the past several months, there have been rumours of a forthcoming donation of around $4 million from the Bangladesh Alliance, which includes Walmart and a number of other US and Canadian brands with production in Bangladesh.

“The donations of The Children's Place and others in the run up to the anniversary has brought us close to the target, but frustratingly, not close enough to finally complete this programme,” says Sam Maher.  “For months Walmart has been delaying any further donation, claiming that instead the Alliance would be making a significant payment. With only $2.7 million left, the Alliance is presented with a unique opportunity to finally close the gap and we are calling on them to make good on this promise by May Day. There is no excuse for any further delay.”