by mirjam — last modified 2014-12-18 11:47
To mark the United Nation’s International Migrant Day, Clean Clothes Campaign released a new report in conjunction with the MAP Foundation outlining the gross violations of labour rights among migrant workers in the Thai apparel industry. 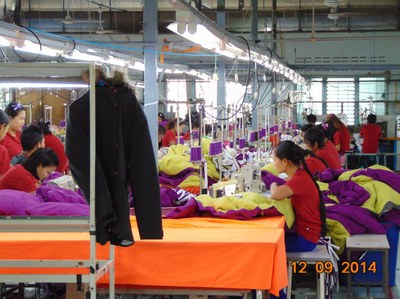 Although migrant workers are currently entitled to the minimum wage of 300 THB (7.27 EUR) a day, they are typically paid between 150-180 THB (3.6-4.36 EUR) per day, according to interviews carried out by the MAP Foundation for this report. The sum of 300 THB also falls short of a living wage, and is insufficient to sustain a worker and her family.

“The research we conducted illustrates just how badly migrant workers are treated. They are working long hours for wages that do not even meet their basic needs. Thai labour laws are violated as there is little enforcement from labour agencies and because of migrants’ precarious state,” said Brahm Press Executive Director of MAP Foundation.

Workers are also commonly required to work overtime. On average, migrants work almost 11 hours a day, and sometimes between 12-16 hours during peak periods or deadlines. Yet, they only receive on average approximately 16 THB (0.40 EUR) per hour or less, when legally they should be receiving 56 THB (1.42 EUR) per hour for overtime. One person, an 18 year-old female, was paid as low as 100 THB (2.4 EUR) per day, and another was paid only 120 THB (2.9 EUR) per day. The focal point of garment production in Thailand is located in Mae Sot, Tak Province, roughly 500km northwest of Bangkok on the border with Myanmar. By focusing production in border towns, such as Mae Sot, the garment industry aims to reduce production costs by hiring migrant workers, who are seen as desperate and therefore easily exploited, at below the minimum wage. In fact, many of the migrants are undocumented, which increases their vulnerability to exploitation and limits their ability to leave the factory compounds. Those who do have documents often have them withheld by the employer.

Contributing to the environment of exploitation is the fact that a large proportion of factories in Mae Sot are sub-subcontractors for factories in central Thailand. In fact, none of the garment factory workers interviewed for this report knew which brands they were producing garments for.
The total number of migrants estimated to be working in the Mae Sot area is between 200,000 - 300,000. Only 30,000 migrants are currently registered with work permits in this area with the rest being undocumented. Some 60,000-80,000 migrants are estimated to be working in knitting and garment factories with possibly 70 percent women.

“We call upon brands to stop being complicit in this systematic wage theft and ensure that all workers in their supply chain, including migrant women, are paid living wages,” said Tessel Pauli, International Coordinator Clean Clothes Campaign.

Swe Swe Myint, working in Mae Sot: “I cannot read my contract and do not have copy of it. I work long hours, and do not get any day off except for pay day. I know that the legal minimum wage is 300 THB per day, but I only get 120 THB a day.”
Hnin Weh also works in one of the factories in Mae Sot: “I work 12 hours a day but do not get paid for overtime. The only day off I get is pay day - when all the workers come to the factory to receive their money.”

Although migrant workers can enter the social security system and receive the same benefits as Thais, in reality 90% of the garment workers interviewed said that they either had absolutely no idea whether they qualified for social security, or that they had not been able to access the social security system because their employers did not enrol them.
This research took place in Mae Sot is a border town near Burma, 500 KM away from Bangkok. By focusing production in border towns, such as Mae Sot, the garment industry aims to reduce production costs by hiring migrant workers, who are seen as desperate and therefore easily exploited, at below the prevailing minimum wage.  Also contributing to the environment of exploitation is the fact that a large proportion of factories in Mae Sot are sub-subcontractors for factories in central Thailand.