by mirjam — last modified 2015-05-11 13:33
Bata admits to a cut-and-run after a conflict in one of the factories in Sri Lanka which made their shoes. One year ago, close to 200 workers were fired after they complained about not getting their salary increases. Join our action, tell Bata on facebook and rate Bata on their own rating page: http://on.fb.me/1sc8n9w 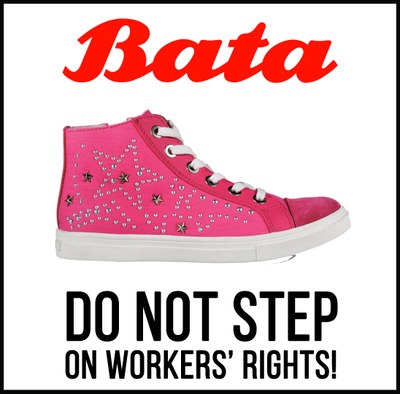 'The management told other factories not to hire us again. They described us as trouble makers and saboteurs. But this factory [wa]s like our home, we worked there for more than ten years. And now we are unemployed.'  - Ex Bata worker -

Join our action, tell Bata on facebook and rate Bata on their own rating page.

On the 5th of December, one year after the workers were fired, they organised a protest. Bata has not responded so far.

Last time, we asked you to send a letter to Bata, because the factory where Bata had their shoes produced was reported to not pay the promised wage increases and sacked 179 workers after they protested against this violation. Thanks for joining our action again!

Bata responded by effectively admitting to a cut-and-run. Instead of providing a resolution in the conflict, Bata choose to end their business relationship with the factory Palla & Co. This is a clear violation of their responsibility to respect human rights.

By ending the commercial relationship with Palla & Co. without trying to solve the conflict, Bata has not only failed to stop the labor rights conflict. Moreover, by not sufficiently monitoring Bata’s Code for Suppliers and by failing to take corrective action, Bata also contributed to the wage violations and illegal dismissals. That's why Bata is responsible – together with Palla & Co. – for the resolution of the labour rights conflict even though Bata is not producing at Palla & Co. anymore.

In accordance with the UN Guidining Principles on Business and Human Rights, we strongly urge Bata to contact the Sri lankan union FTZ&GSE Union to establish a meaningful dialogue with the union and Palla & Co. It is imperative that Bata also engages with Palla & Co to find a suitable solution for the workers regarding:

We are sure that Bata would agree that workers producing for Bata should be treated with respect and fairness.

Tell Bata to make sure the workers get their salary increase and their jobs back!