by mirjam — last modified 2014-05-20 11:23
Clean Clothes Campaign and campaigners around the world continue to call for the immediate dropping of all charges and release of the 23 men arrested in Cambodia in January 2014. Today the third day of the trial was postponed again, to tomorrow. 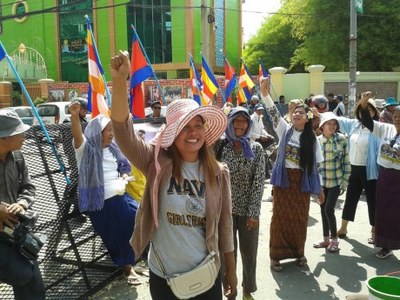 Clean Clothes Campaign is disappointed to learn of the second adjournment in the trial of the 23 who were arrested during demonstrations about a living wage in January this year.

The trial which was due to begin on April 25 has already been postponed twice and hopes were high that as the trial began today, May 20,  it would give all those arrested the opportunity for justice.

However this postponement has been met with bitter disappointment by the men's supporters, including human rights activists, monks and the men's families.

Anne Dekker of Clean Clothes Campaign says "we demand a fair and free trial. It's been far over a hundred days that they have been inprisoned unlawfully. Workers asking for a wage they can live on can not be treated like criminals. We call on the Cambodian Government to ensure that there are no further postponements."

More information on the trial proceedings to date.