by emma — last modified 2014-05-06 14:57
The trial of 23 Cambodians who were arrested during living wage strikes in Phnom Penh in January has been postponed for a second time. The trial that was originally due to begin on April 25, resumed on May 6 only to be adjourned again. The trial is now scheduled to begin on May 20. 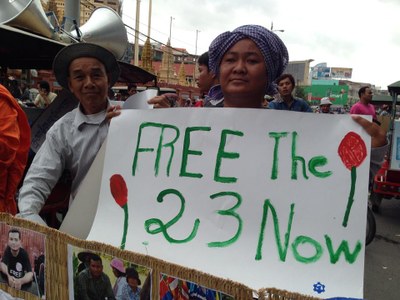 Clean Clothes Campaign is disappointed to learn of the second adjournment in the trial of the 23 who were arrested during demonstrations about a living wage in January this year.

"I truly hope that I will be free and receive justice from everyone’s sacrifice, for the sake of our nation." Vorn Pao.

21 of those who were arrested in the January violence continue to be held in the high security CC1 prison outside Phnom Penh having had earlier bail requests denied.

The trial which was due to begin on April 25 has already been postponed once and hopes were high that as the trial began today, May 6,  it would give all those arrested the opportunity for justice.

However this postponement has been met with bitter disappointment by the men's supporters, including human rights activists, monks and the men's families.

Anne Dekker, of Clean Clothes Campaign says " we are extremely disappointed that these men and their families have to face yet another set back in their struggle for justice.  CCC and our partners worldwide continue to stand in solidarity with all those demanding a living wage for garment workers in Cambodia and we call on the Cambodian Government to ensure that there are no further postponements."

More information on the trial proceedings to date.