by emma — last modified 2014-03-31 13:26
Shila Begum, who spent a whole day trapped under the rubble of the collapsed Rana Plaza building is bringing her story to consumers and brands in Europe in order to urge brands to pay up. 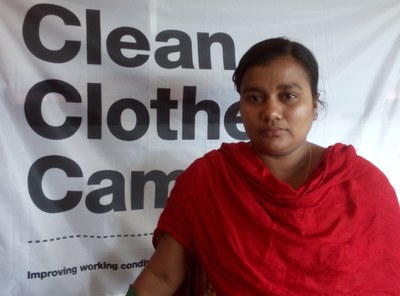 Shila Begum has never left Bangladesh before, and yet today she has flown from the Netherlands to Italy as part of a European speaker tour where she will be sharing her story with consumers, campaigners, trade unions and clothing brands in the hope that before April 24th - the one year anniversary of the collapse of Rana Plaza - brands will pay up into the Rana Plaza Donor Trust Fund.

She is making this brave trip along with Secretary General of the National Garment Workers Federation Safia Parvin and Shahidul Islam Shahid as part of the Pay Up campaign being run by Clean Clothes Campaign and our partners across the globe.

With just three weeks until the annversary of the devastating collapse major brands including Benetton, Auchan and Adler Modermarkte are still to commit any funds to the Rana Plaza Donor Trust Fund which needs US$40million in order to ensure all the families of the 1,138 who died and the thousands of suvivors like Shila receive the compensation they need.

We welcome Shila to Europe and will be updating you on her progress over the next two weeks.