by mirjam — last modified 2014-01-23 09:22
Today, the Berne Declaration (EvB) and Greenpeace Switzerland award American textile giant Gap the Public Eye Jury Award for their continuous refusal to contribute to effective reforms in the textile industry. The Public Eye Awards shine a light on the current and most serious cases of human rights violations and disregard for environmental protection and sustainability by corporations. 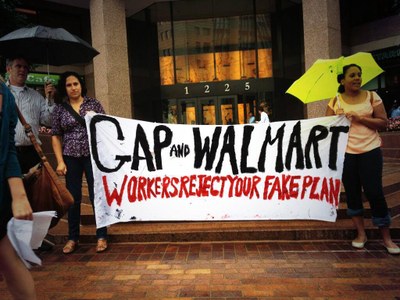 Despite the most serious industrial disaster that the garment industry has ever seen, the collapse of the Rana Plaza building in Bangladesh,  which left over 1,100 dead and countless people injured, Gap have shamelessly refused to sign the legally binding agreement Accord on Fire and Building Safety in Bangladesh. Instead, the company continue to actively undermine the efforts for effective reform in the textile industry with their own corporate-controlled sham agreement.

When a few months after the Rana Plaza disaster eight workers were killed during a fire at the Aswad factory, a known Gap supplier, the company denied having a relationship with the factory, inspite of documents clearly showing their involvement. The surviving workers and the families of the deceased are still waiting for Gap to pay compensation.

Liana Foxvog from International Labor Rights Forum (ILRF), who along with SumOfUs und United Students Against Sweatshops (USAS) nominated GAP, says: “Gap deserves this award. The company portrays a public image of being a leader in responsibility while actively undermining real corporate responsibility. Instead of joining the Accord, GAP created together with Walmart the Alliance for Bangladesh Worker Safety. Despite sounding promising, this initiative is not legally binding and includes no union involvement, making it hardly more than a PR stunt to dodge safety responsibility.”

Kalpona Akter, Executive Director of the Bangladesh Centre for Workers Solidarity and herself a former child garment worker is in Switzerland where the Public Eye Awards are being held.  She said: “Gap still refuses to make a contractual commitment to work with their suppliers and local and international trade unions to ensure that repairs are made and workers have the right to refuse dangerous work.”

CCC applauds the Public Eye Awards for highlighting Gap's systematic failure to live up to their social responsibility and calls on Gap and all other brands to sign the Accord on Fire and Building Safety in Bangladesh. Furthermore, all brands involved at Rana Plaza should pay into the compensation fund for the Rana Plaza survivors and the families of the deceased.