Campaigners demand an end to sandblasting

by emma — last modified 2013-07-09 10:37
Campaigners today, July 9th, held a demonstration outside the Hong Kong flagship store of Hollister demanding the company do more to end sandblasting in the garment industry. 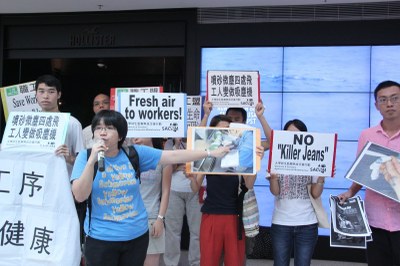 Campaigners from groups including Scholars and Students against Corporate Misbehaviour (SACOM),  ITUC/GUF Hong Kong Liaison Office (IHLO), Hong Kong Confederation of Trade Unions, Globalization Monitor and members of the Socialist Party from Malaysia called on Hollister and other major brands to make public details of how they implement the voluntary ban on the deadly use of sandblasting and called on them to support mandatory bans worldwide to put an end to sandblasting once and for all.

The action comes on the day a new report Breathless for Blue Jeans is published which highlights that the deadly practice of sandblasting continues despite major brands committing to a voluntary ban three years ago.

The report found that despite workers, employers and brands being aware of the risks of silicosis – a deadly lung disease - workers were still carrying out the practice often hidden from sight. “Some of the sandblasters interviewed said that they were willing to take the jobs at the sandblasting unit because the salaries were higher. This, even though they had heard it could cause fatal diseases. It is dreadful that factory owners and brands continue to use sandblasting. Despite being aware of the health risks, they have apparently decided to compensate workers by paying higher wages.” said Liang Pui Kwan, project officer at SACOM.

Hollister is a popular brand in Hong Kong among young people and the action attracted a lot of interest from shoppers and passers-by – with many signing postcards in support of a global ban.

No one from Hollister came out of the store – but demonstrators gave the report to the security guards to pass on!

If you want to help make them really listen SACOM also has a petition in English and Chinese which you can sign here.