by paul — last modified 2013-06-18 06:29
With the death toll rising to 1126 on the evening of the 12th of May, and an estimated 1650 workers admitted to hospital following the Rana Plaza collapse on 24th of April, the estimated long term compensation will be more than 54 million Euros (71 million USD). This calculation is based on ILO standards and an established formula developed following previous fire and safety accidents in Bangladesh, developed by Bangladeshi and international trade unions. 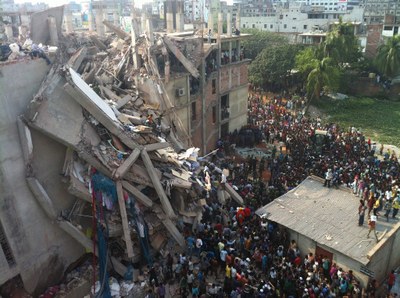 The figure includes compensation for pain and suffering, as well as long-term loss of earnings for families of deceased workers, and injured workers not able to return to work. It does not include medical costs for the physically injured workers, psychological support for all workers or their families involved in the collapse or payment of wages and legal severance payments to the Rana Plaza workers who are all now left unemployed.

Reports from the ground indicate that many workers and families are facing desperate situations as they are unable to pay medical bills, rent and daily expenses.

Tessel Pauli of the CCC says, “The families and injured workers need to know that their immediate and longer term rights to compensation will be assured, and therefore brands that have had production at Rana Plaza need to step forward immediately and put plans for paying compensation into place”.

Crucially, brands need to ensure that complete lists of all workers are made following public criticism about the lack of complete lists of dead workers, survivors and injured workers provided by the authorities.

Thus far only Benetton (Italy), Bon Marche (UK), Cato Fashions (USA), The Children’s Place (USA), El Corte Ingles (Spain), Joe Fresh (Loblaws, Canada), Kik (Germany), Mango (Spain), Matalan (UK), Primark (UK/Ireland) and Texman (Denmark) have acknowledged recent production or orders with these factories. Labels relating to YesZee were found at the site; they told the CCC by phone that they were sourcing through an agent. Premier Clothing (UK) have committed to providing financial assistance to families and victims according to media reports, although they have not been clear about their sourcing relationship.

However, the majority of the remaining 40 or so other brands linked to the factory are yet to come forward to confirm their relationship with the factory, thus slowing down the process for distributing compensation.

The CCC says that even worse, only six companies have announced they will make some form of financial contribution to the workers, including Primark (UK), El Corte Ingles (Spain), Loblaw (Canada), PVT (Denmark), Matalan (UK) and Premier Clothing (UK). While Primark has stated that they will base their compensation on the formula proposed by trade unions and endorsed by NGOs, other companies remain with wording that is often vague and could easily be turned into charitable donations to workers rather than payment of the money they are owed.

“In the immediate aftermath of this disaster, while everybody is looking at Bangladesh and the main buyers from these factories, some companies might want to look good by making promises and provide some humanitarian relief on the ground. The victims need immediate support, but also need to be sure about long-term compensation and being sure that all workers and families are included.” adds Tessel Pauli.

The Clean Clothes Campaign expects all brands that have produced in Rana Plaza to engage with the Bangladeshi trade unions and IndustriALL, the global trade union federation representing garment workers, to negotiate the final compensation figures, and to agree the size of contributions from all stakeholders. In addition to brands and retailers, the government, employers' association BGMEA and the employers are also expected to pay into the fund.

It is vital that brands and retailers immediately pay into a compensation fund that can be quickly distributed. This will mean the costs that are being incurred right now such as medical costs and lost wages are not a burden on workers and their families and secondly, it will expedite the dispersal of compensation once calculations and lists of victims and brands have been developed. These funds must be dispersed in a transparent way and in agreement with Bangladeshi and international trade unions.

Getting justice for the victims of Rana Plaza must be combined with immediate steps to prevent future tragedies. All brands involved must sign up to the Accord on Fire and Building Safety In Bangladesh and begin work to make the Bangladesh garment industry safe.

The calculation for compensation for injured workers and deceased workers is based on ILO convention 121 and a formula established in Bangladesh used to calculate compensation for victims of the Hameem fire (2010), Eurotex safety accident (2011), Tazreen fire (2012) and Smart Export fire (2013). It is based on 500.000 taka for pain and suffering per worker, and loss of income based on an average salary of 5833 taka per month (which includes two months bonus per year) for 10 years* (injured workers) and 25 years (deceased workers). Wages are annually adjusted for inflation.

* The exact calculation for amount and duration of the compensation for injured workers will depend on the nature of their injuries and their (in)capacity to be employed).

The brands that have announced financial compensation are:

For more information on Fire and Building safety and compensation schemes in Bangladesh see the CCC report Hazardous Workplaces, published in 2012.

H&M and Inditex announced on 13 May 2013 that they have agreed to sign the Accord on Fire and Building Safety in Bangladesh, following PVH and Tchibo who signed a binding agreement on safety in Bangladesh in 2012.

CCC has been working with partners in Bangladesh to improve fire and safety conditions since 2005, when the Spectrum disaster killed 64 workers. Since then we have campaigned for justice for workers following numerous fire, including Garib and Garib, That's It Sportwear and Eurotex. See http://www.cleanclothes.org/news/2013/04/11/spectrum-collapse-eight-years-on-and-still-little-action-on-safety