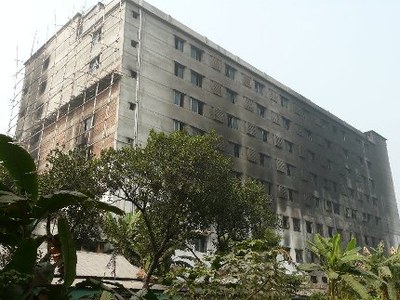 The package proposed by C&A foresees medical costs for injured workers as well as compensation for relatives of deceased workers (both children and other relatives). The Clean Clothes Campaign welcomes the scope of the package as it includes several groups who have been severely affected by the Tazreen Tragedy which costs the lives of at least 112 garment workers on 24 November last year.

However, the CCC is disappointed by the refusal of C&A to base their calculations on ILO Convention N° 121 and established best practice in Bangladesh. "The amount (1.200$) proposed by C&A for the relatives of the deceased workers is less than 4% of what is needed as calculated by Bangladeshi unions based on previously established formulas in Bangladesh” argues Tessel Pauli from the Clean Clothes Campaign. "In a country such as Bangladesh where compensation for victims is not adequately provided for by the employers and authorities, we expect brands that were sourcing from Tazreen to pay at least 45% of all the compensation that is needed”, she adds. "After all, C&A has been able to make profits year after year because of the low wages and social security costs in the Bangladeshi garment industry, without ensuring the safety of  the factories.”

CCC is also disappointed by the absolute lack of trade union involvement in determining the amounts and the mechanisms for disbursal. C&A relies instead on the BGMEA for this, and adds its contribution to theirs. However thus far only the families of 53 dead workers received (some) compensation from BGMEA.

CCC calls upon C&A to invite the local unions and other brands to the table and negotiate a full and fair settlement. Last week, Bangladeshi local unions reached an agreement with two buyers on compensation for the families of the 8 workers killed in the Smart export factory fire on 26 January. “The Smart case agreement follows the model of the Eurotex, Hameem and Spectrum cases where brands chose to negotiate using international standards. C&A should follow established best practice, as proposed several times by CCC and partners. Working with local unions will enable C&A and other brands to develop a disbursement that reaches all victims in a transparent and quick fashion. Already far too much time has passed”, says Pauli.

The CCC salutes the willingness of C&A to consider joining the Bangladesh Fire and Building Safety Agreement. The purpose of the Agreement, which has been signed by PVH, owner of Calvin Klein and Tommy Hilfiger, and German retailer Tchibo, is to prevent and correct the dangerous fire safety risks that have now resulted in more than 700 worker deaths over the past decade.

The need for C&A to sign up to the Agreement is made all the more urgent when looking at the new audit program announced by C&A. The program is unlikely to create any real change and  lacks  worker involvement, transparency and independency of inspections.

C&A states that if violations are identified they will take their orders out of the factory until these are remedied. But without commitments to financial support and adequate pricing, it is unlikely that their suppliers and subcontractors will undertake the remediation requested. This means that the workers are left in a dangerous building, while C&A leaves the premises. Neither the supplier lists nor the inspection reports are made public, so no action will be triggered from any other party either. Even if the supplier would agree to remedy part of the violations, for example by unlocking the emergency exits, this is likely to be reversed once the commercial audit firm chosen by C&A has left the building.

A central role for workers and unions, including worker-led safety committees in all factories and access to factories for unions to educate workers on how they can protect their rights and their safety, including their right to refuse unsafe work, is very much needed. “ C&A has over 200 suppliers in Bangladesh, and produces over a third of their garments there. They can and should do more to prevent unnecessary factory worker deaths. Signing this Agreement and working with trade unions in Bangladesh is the first, essential step."

Clean Clothes Campaign together with its global allies will continue its public campaign calling upon all brands sourcing from Tazreen worldwide to ensure a full, fair and negotiated settlement, and to sign the Fire and Building Safety Agreement. Actions are foreseen in the US and Europe in the coming weeks.