by geertjan — last modified 2013-04-24 09:51
Clean Clothes Campaign, together with the Free Somyot Campaign and the Thai Labour Campaign strongly deplores the conviction of human rights defender and magazine editor Somyot Prueksakasemsuk. Today, the Bangkok Criminal Court found him guilty on 2 counts of Article 112 of the Criminal Code (the lèse-majesté law*) and sentenced him to 11 years of imprisonment. 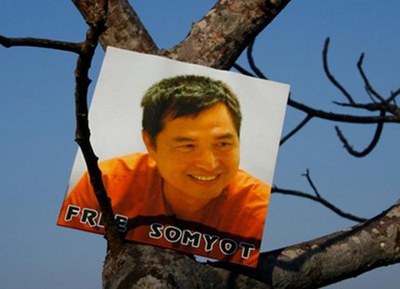 Somyot is a prisoner of conscience. He was convicted solely for the exercise of his right to freedom of expression and opinion and the right to participate in public life. He has been in detention since April 2011for the publication of two articles deemed insulting to the monarch. Today's verdict is a serious blow to the rule of law in Thailand and will further contribute to self-censorship.

The verdict is a violation of international human rights law, in particularly the International Covenant on Civil and Political Rights (ICCPR), which Thailand has ratified. Currently, Thailand is running for a non-permanent seat on the United Nations Security Council. CCC recalls that the UN Charter urges the General Assembly, where the election takes place, to consider candidates’ contribution “to the maintenance of international peace and security and to the other purposes of the Organization,” (article 23.1 on criteria of membership of UNSC) including “respect for human rights and for fundamental freedoms” (article 1.3 of the UN Charter).

If Thailand is to be in compliance with its binding international legal obligations to respect and protect basic rights, this unjust verdict against Somyot should be promptly overturned on appeal. Additionally, while the appeal is being considered, his constitutional right to provisional release should be upheld so that he could reunite with his family, better attend to his medical conditions, and adequately prepare for his defense.

One political prisoner is one too many. CCC calls on Thailand to free Somyot and all other persons detained on politically-motivated charges and end all forms of harassment against them.

*Thailand’s lèse-majesté law prohibits any word or act, which “defames, insults, or threatens the King, the Queen, the Heir-apparent, or the Regent”. This law places the country in contravention of its international legal obligations to uphold international standards of freedom of expression.