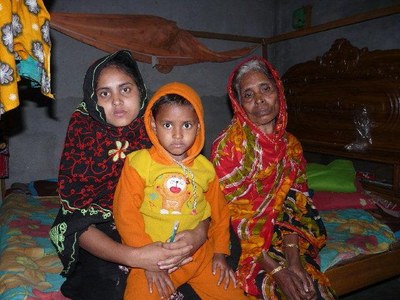 Jomila Khatun is the mother of Ainal Hossain (25), who died in the fire. He was her only son. She is a widow and stayed with Ainal and his wife Rasheda. Rasheda has no job. The family is from Ashulia, the area where the factory was located.

“Ainal worked in the garment industry since five years as machine operator on the fourth floor, his salary was 7000Tk. We found his body the next morning at ten o’clock at the school. Everybody got 20,000Tk but we didn’t, we didn’t know that we were entitled to get money and our mind was somewhere else. So we received nothing.”

Rasheda adds: “There were officials around when we collected the body, but no one told us anything. We didn't put our name on a list. We just took the body home and buried him on the graveyard the same day. My guardian went to BGMEA on Monday, the next day. They took his name and mobile number and said that we would get money later. We didn’t get any paper from them that shows that we put our name on the list though.”

Miraj's father is sitting next to his hospital bed. His son is sleeping. “We have no land. I have four sons,, but Miraj is the only one with a job. My youngest son studies and my other two sons are rickshaw drivers.” Miraj wakes up. “I was a supervisor on the fifth floor. There was smoke everywhere. So I climbed out of the window onto the bamboo that was there. There was some cloth hanging, I grabbed it and then jumped down. After that I don’t know anything. I woke up and found this thing on my hand (a drip) and discovered that I was in the hospital. That was eighteen days ago and I received two operations. BGMEA gave me two months salary and said that they will give money for the treatment and medicines.”

His father adds: “But they have not given any money for me to stay here, for food. We share the food that he gets here.”

About the working conditions in the factory, Miraj says: “Once I told the manager: there are only three stairs inside and downstairs is the go-down, how can we get out if there is a fire there? The manager told me that they will make stairs outside, but they didn't do anything. This was a long time ago. When I leave the hospital to go home to the village I won't be able to do anything.” Rezaul never found the body of his wife. “My wife is missing. She was a machine operator and worked on the third floor since about nine months. Recently, she had been sick and had gone to her village. Just thirteen days after she returned to her work the fire happened. I haven't seen any officials, I only talked to a labout lawyer. He gave me a slip saying that I had to go for DNA test in Motijheel (business area in Dhaka). My children have given blood for DNA tests but there's no result yet and I didn't get any compensation because my wife’s body hasn't been found."