by geertjan — last modified 2013-04-24 09:51
Workers at a Cambodian underwear factory supplying H&M and Walmart are keeping a 24-hour vigil outside their factory after managers shut up shop and fled, owing hundreds of thousands of dollars in unpaid wages and benefits. Workers from Kingsland Garment are maintaining a camp in front of the factory in hopes of catching managers if they return to take machinery and equipment out of the factory. 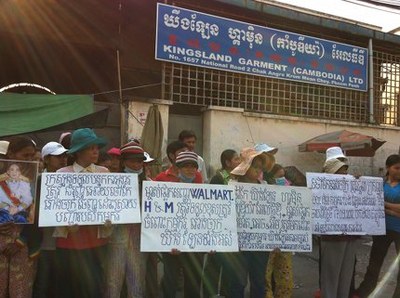 After the factory abruptly closed in December, many of the workers were evicted from their homes because they could not pay their rent. The workers encamped outside say they are owed a combined $200,000. Cambodian law requires a certain amount of severance for workers based on the number of years each has worked at the factory, but Kingsland – the Hong Kong-based owner company - is currently offering less than half.

Workers believe that the factory closed with plans to reopen once it has shed long-time employees who have seniority and benefits. They say the new factory will be similar to other Walmart or H&M suppliers that rely on temporary workers who will work on 3-month, short-term contracts. Such a scheme will prevent workers from forming a union or having any job security.

The factory has been bereft of an independent union since representatives from what is now the Cambodia Confederation of Apparel Workers Democratic Unions (C.CAWDU) were fired or beaten in incidents in 2007 and 2008.

The international labour rights community, including Clean Clothes Campaign, have issued a statement -signed by 17 organisations from across Asia, Europe and the US - in support of Kingsland workers. It is calling on Walmart and H&M to ensure that Kingsland owners pay all wages and indemnity and comply fully with Cambodian Labor Law.

The statement also calls for immediate and transparent investigations to be carried out by Walmart and H&M, and strongly urges the Ministry of Labor to independently consider a further complaint regarding the closure of the factory.

25-years-old, Worked at the factory for 5 years

“It’s been so difficult to feed my family. I can’t afford enough food because it’s so expensive, and I’ve had to borrow so much money. I owe money to my landlord and he keeps threatening to evict me. We want Walmart and the government to find a proper solution according to the law. Workers are victims here. It’s so hard to live without proper pay.”

32-years-old, Worked at the factory for 13 years

“I came here to join the protest because I can’t stand what the owner of factory has done by shutting down the factory and only giving us $46 for each year we worked in severance pay.We just want to be compensated according to the law. Some of us have been here 10 or 15 years. The factory isn’t thinking about the workers. We want the owner and Walmart to take responsibility for this.

About 180 workers join us every day and at night 30 or 40 workers sleeping in front of the factory gate because we afraid are afraid they will come to take the equipment out.”

35-years-old, Worked at the factory for 7 years

“Before the factory shut down, we have no work to do and they only gave us half of our salary. It’s not reasonable. In this factory we have the union but it’s the pro-factory union, they never find solution for workers when we have problem”

22-years-old, Worked at the factory for 8 years

“I am 6 months pregnant. It was difficult to work while I’m pregnant but even though it’s hard I need to struggle. I don’t know what to do. I can’t survive with the salary cut. I will protest like this until there is a solution. I want the factory and Walmart to rush to give us our severance pay.”

“I worked here for 3 months in 2008. They have lots of problems in this factory. It’s hard to take leave when we are busy or sick. They deny us so we just go to work even though we were sick. Sometimes we have to leave without permission and when we go back to work we face blame. We were always afraid of losing our job at that time. Inside the factory it was very hot and the bathroom was very dirty and not enough air. Back then there was a lot of fainting.”

Listen to the workers outside the factory: http://youtu.be/hlMKKFUJ2NQ