by geertjan — last modified 2013-04-24 09:50
The Clean Clothes Campaign, along with trade unions and labour rights organisations in Bangladesh and around the world is calling for immediate action from international brands following yesterday's fire in Dhaka Bangladesh, which cost the lives over one hundred garment workers. 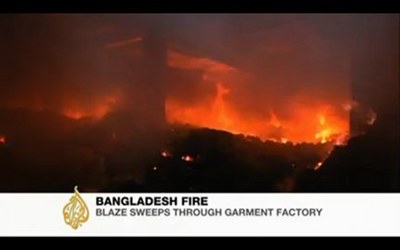 The killed and injured workers were producing garments for international clothing brands when their factory, Tazreen Fashions, went up in flames. According to their website Tazreen produced for a host of well known brand names including C&A, Carrefour, KIK and Walmart.  The Clean Clothes Campaign believes that international brands have shown ongoing negligence in failing to address the safety issues highlighted by previous fires, and that this leaves them with responsibility for yet another tragic loss of life.

Many of the workers jumped to their deaths trying to escape from the six story building, others, unable to escape the blaze, were burned alive. The death toll continues to rise as rescue workers plough through the remains of the devastated factory. One fire fighter at the scene reported that there wasn't a single fire exit on the outside of the factory.  First reports suggest the fire was started by an electrical short circuit. The cause of over 80% of all factory fires in Bangladesh are due to faulty wiring.

"These brands have known for years that many of the factories they choose to work with are death traps. Their failure to take action amounts to criminal negligence" says Ineke Zeldenrust from the Clean Clothes Campaign.

Together with our partners in Bangladesh the CCC is calling call for an independent and transparent investigation into the causes of the fire, for full and fair compensation to be paid to the victims and their families and importantly concrete action from all parties involved to prevent future tragedies.

"As we yet again mourn the loss of scores of garment workers in Bangladesh, we demand that brands step up their game. Tragedy after tragedy underlines our belief that simple, cosmetic changes to existing programmes simply aren't enough. Action needs to be taken to address the root causes of these fires” said Ms Zeldenrust.

The CCC, together with local and global unions and labour rights organisations has developed a sector-wide program for action that includes an programme of independent and transparent inspections, an obligatory upgrading of the buildings supplying participating brands, a review of all existing laws and safety regulations, a commitment to pay prices that can cover the costs involved and the direct involvement of trade unions in worker training on health and safety. The Clean Clothes campaign is now renewing its demand for brands need to sign on immediately.

The employers and government of Bangladesh must also take their share of responsibility. The government must carry out an immediate investigation of the causes of the fire and prosecute those whose negligence has caused the death of these women and men. It must also invest in a country-wide programme of inspections to ensure that the buildings currently in use a fit for purpose and the buildings and wiring meet safety standards. All factory owners in Bangladesh must immediately review the safety procedures in place at their factories, carry out checks on he building and electrical safety and, most importantly, start working with trade unions to train their workers on safety procedures and allow space for workers to voice their concerns.

The Clean Campaign will continue to work with out partners on the ground to establish the full facts of the case and to push for justice for those affected by this terrible tragedy. In the meantime we call on all those with a stake in Bangladesh garment industry to move on from mere hand wringing and towards meaningful and concrete action to prevent such a horrific loss of life from happening in the future.