by geertjan — last modified 2013-04-25 13:50
An international call for action from the Clean Clothes Campaign last week led to protests in cities around the world. In Istanbul, Chiang Mai and Hong Kong workers protested against the failure of Esprit and its agent Li&Fung to pay €4.7 million Euro owed to more than 2000 people who became jobless after the factory closed. 'These actions are only the beginning of our campaign to make Esprit and Li & Fung pay up,' says Ineke Zeldenrust, International Coordinator at Clean Clothes Campaign. 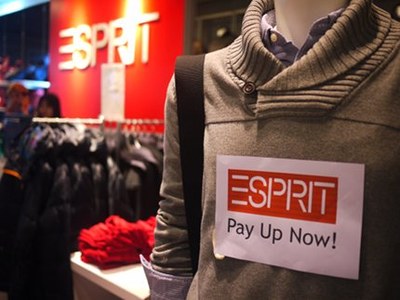 Last Friday security personnel prevented members of labour organisation SACOM and the Asian Transnational Corporations Monitoring Network from entering the Li&Fung office in Hong Kong, home of both head quarters of Esprit and Li&Fung. The labour group continued to the Esprit store and delivered their demands to Thomas Lui, vice president and head of marketing & public relations Asia Pacific.

In Thailand, an international group of women worker leaders protested in front of an Esprit store in Chiang Mai. Signs saying: 'Esprit, put your money where your mouth is' were left sticking to the windows of the store. In Turkey, more than 45 ex-Hey Tekstil workers staged a protest in front of the Li&Fung office.

In a letter to Mr Jose Martinez, CEO of Esprit, 23 unions and women organisations from twelve countries in Central and North America, Asia and Europe, called upon the company to negotiate a serious deal with the Hey Tekstil workers.

Hey Tekstil left over 2000 workers without paying their due wages and severance pay after it closed its doors in February 2012. Hong Kong-based brand Esprit was a big buyer from the Hey Tekstil factory in the months before closure. An estimated 80-90% of the clothes made at Hey Tekstil in Turkey were for Esprit. Sacked workers are still waiting for back wages in the picket line in Istanbul.