by geertjan — last modified 2013-04-25 13:48
Anti-sweatshop campaigners from the US and Europe today united to condemn a summit to be held in Lausanne, Switzerland on Tuesday organised by adidas, intended to deal with the issues workers face when its supplier factories close. Whilst United Students Against Sweatshops, the Clean Clothes Campaign, War On Want and People & Planet welcome comprehensive, long-term solutions to workers’ rights abuses in adidas’ supply chain, they say the summit is “fundamentally flawed” and an “empty rhetorical gesture” as workers in Indonesia that made adidas products have been waiting for severance payments for over a year. 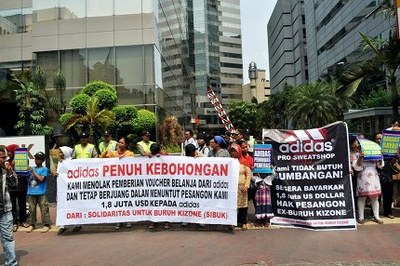 The summit, convened by adidas is to discuss a new scheme, termed the Provident Fund, which the company claims “would provide coverage to workers affected by factory closures and non-payment of wages and benefits.”

The representatives of ex-workers from PT Kizone, a former adidas supplier in Indonesia, stated that “adidas’ meeting in the Alps is an attempt to distract from the fact that adidas is still refusing to pay us US$1.8 million that we earned while producing apparel for adidas”. Campaigners underline that it is indeed the company’s latest attempt at evading its responsibilities to pay the legally owed severance owed to the 2,800 ex-workers from this supplier, even though other buyers have already paid nearly half the amount owed to the workers. To be meaningful, the summit would need to involve Kizone worker representatives, who are currently not invited to attend. The Provident Fund adidas proposes cannot replace the severance payment to the Kizone workers, as it remains adidas' responsibility to provide redress for rights violations that have already happened.

The case of the workers at the PT Kizone factory has been subject to a high profile international campaign involving 50,000 people signing a petition to pressure adidas to pay up. Two US universities, Cornell and Oberlin, have committed to cut ties with adidas and another, Wisconsin, is taking adidas to court.

Garrett Strain from USAS said "adidas’ subcontracted workers are not demanding Alpine summits – they’re demanding the severance they are legally owed. We will not allow adidas to use this summit as a means of evading responsibility for its legal obligations to pay severance to the former PT Kizone workers."
Liz Parker from CCC said “By organising a summit to develop a long term solution adidas appears to be trying to prove that it is behaving responsibly towards the workers that make its products, but it is not paying the Kizone workers what they’re owed! This should,be the first step to take. ”

Murray Worthy, sweatshops campaigner at War on Want said “We will continue to fight against the appalling exploitation and abuse of workers’ rights in adidas supply chains. Together we will keep up the pressure in the US and Europe until adidas pays its former workers the millions they are owed.”

Ruth Fox from People & Planet said “students across the UK will continue to campaign against adidas until they pay their former workers what they are owed. They will not be bought off by spin and whitewash”.