by geertjan — last modified 2013-04-24 09:50
US Cornell University announced that they will severe their contract with adidas from the beginning of October 2012, becoming the first U.S. university in history to terminate an agreement with the German company over labour rights. Cornell’s decision comes nearly a year and a half after PT Kizone, an adidas supplier factory in Indonesia, shut down unexpectedly in 2011. The closure left nearly 3,000 workers without $1.8 million in legally-owed severance. Adidas still refuses to pay up. 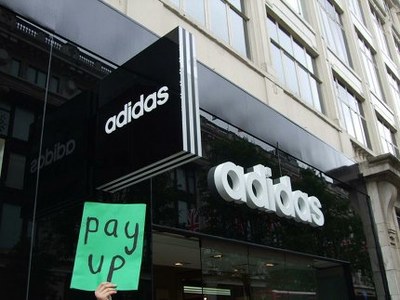 'We believe that severance is a basic workers’ right,' says David Skorton, President of Cornell University in the university's strongly worded termination letter to adidas. 'This gap in the apparel industry's approach to worker rights is a critical issue that demands immediate attention.'

The announcement to terminate came after a massive student campaign supported by United Students Against Sweatshops (USAS). Clean Clothes Campaign, War On Want and People and Planet have been working with USAS alongside the Indonesian workers to claim the money owed to workers from adidas.

Students at the the University of Wisconsin-Madison have also been campaigning for their university to drop its $11 million sponsorship agreement with adidas, but have met a number of obstacles, including an ongoing lawsuit against adidas led by the Wisconsin Attorney General’s office. 'Chancellor Ward has used legal manoeuvres and other tactics to stall on this issue for over a year,' said Lingran Kong, a leader in USAS’ chapter in Madison, the Student Labor Action Coalition (SLAC). 'Cornell’s action reaffirms that our contract with adidas must be terminated now.'