Free Somyot! Freedom of speech is not a crime

by geertjan — last modified 2013-04-25 13:43
On 19 September the Thai Criminal Court will announce the date of the verdict of Somyot Prueksakasemsuk, well known editor and long time labour rights activist in Thailand. He can face 30 years in prison. We need your voice again, so let it be loud! 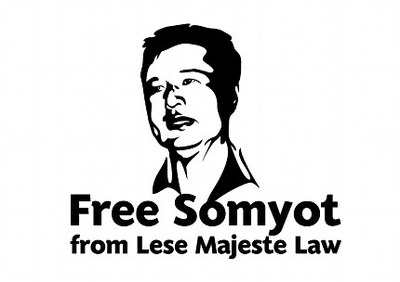 CCC continues to call upon the Thai authorities to drop all charges against Somyot  Prueksakasemsuk and all other human rights defenders detained through the lèse majesté laws. We ask that as a minimum, Somyot will be released on bail.

Somyot was arrested more than a year ago, in April 2011. Thai authorities claim that two publications in his magazine Voice of Thaksin 'offended' the country's king. He was accused of lèse majesté, a crime that carries up to 30 years of imprisonment. Somyot has been forced to await his trial in an overpopulated and unhealthy prison for over seventeen months now and has been refused bail eight times.

CCC is working with human right organisations to influence governments of other EU countries to reach out to the Thai government. We also ask that all human rights defenders in Thailand are able to carry out their legitimate human rights activities without fear of reprisals and free of restrictions, including judicial harassment.

For more information and regular updates from the trial, please go to: www.freesomyot.wordpress.com

This letter will be submit by TLC and other organizations in Thailand to Thai Authorities  before Sept 19, 2012.

We are writing to you in connection with the continued detention of  Somyot Prueksakasemsuk whose case will be heard again on the 19  September 2012 and who can face the maximum penalty of 30 years’  imprisonment.  He has been in pre-trial detention for more than a  year since the arrest by officials from the Department of Special  Investigation in April 2011.

We believe the denial of bail is part of an ongoing pattern of  harassment and intimidation of human rights defenders in Thailand.  We ask the Thai judicial authorities to ensure that the rights of  Somyot Prueksakasemsuk are upheld during his detention and that he  is accorded his right to a fair trial, including the right to bail.

We respectfully remind you that the United Nations Declaration on  the Right and Responsibility of Individuals, Groups and Organs of  Society to Promote and Protect Universally Recognized Human Rights  and Fundamental Freedoms, adopted by consensus by the UN General  Assembly on 9 December 1998, recognises the legitimacy of the  activities of human rights defenders, their right to freedom of  association and calls on States to ensure that they can carry out  their activities without fear of reprisals.

We ask you to ensure that Somyot Prueksakasemsuk is released.  Failing his immediate and unconditional release, we ask that Somyot  Prueksakasemsuk be granted his right to bail, in accordance with  fair trial standards under domestic and international law;

Human rights defenders in Thailand, especially those working on  freedom of expression, are able to carry out their legitimate human  rights activities without fear of reprisals and free of all  restrictions, including judicial harassment.