by geertjan — last modified 2013-04-24 09:50
For the first time, migrant workers in the Mae Sot area successfully demanded wages in accordance with the new legal minimum wage. Factory owner M Apparel (one of Lee's suppliers) gave into the demand of 323 (mostly female) workers after negotiations with the workers who received support of MAP foundation and Yaung Chi Oo Worker Association. 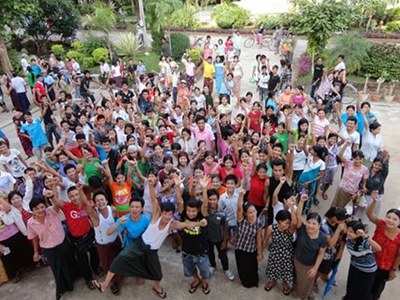 The workers had not received wages since April, when the Mae Sot area implemented a new minimum wage law, and went on a strike. Initially, the women had asked for a minimum wage,  an improvement of their housing conditions and access to clean water and electricity.

As a result of the strike, M Apparel evicted the group from their lodgings. The workers relocated to a nearby temple that showed solidarity by offering food and shelter for the period of their strike. Only when M Apparel agreed with the demands of the workers, the 21-day strike was terminated.

Clean Clothes Campaign congratulates all 323 workers with their success and expects all employers to pay migrant workers according to the minimum wage law.