by geertjan — last modified 2013-04-24 09:50
On 11th June, to coincide with the Euro 2012 football tournament, which is sponsored by adidas, dozens of PT Kizone workers and their supporters held a march in Jakarta calling on adidas to pay the $1.8 million dollars owned to them in severance pay. 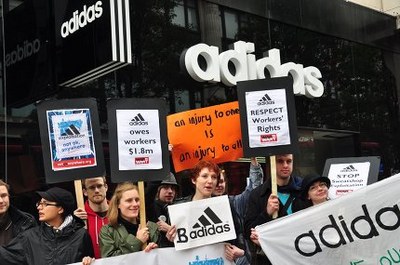 The workers stopped at the German Embassy, calling on them to put pressure on adidas, which is headquartered in Germany, to comply with their commitments to Indonesian workers. They then stopped at the British Embassy, demanding that the money owed, a tiny percentage of the money adidas paid to sponsor the London 2012 Olympics, is paid now. One worker told journalists that “adidas succeeded in becoming a London 2012 Olympics sponsor – why are they leaving workers hanging?”

Protesters in Jakarta were joined by activists across Europe, including in Austria, Spain, Denmark and the UK , who organised a variety of actions outside adidas stores in major cities to highlight the plight of Kizone workers and to demand that adidas pay up. Students in the US also took action, demanding that their universities severed contracts with the company if they continued to deny responsibility in this case.

Just days after the demonstrations took place adidas asked to meet with the district level union, which represents the majority of PT Kizone workers, and the factory-level union. This is the first time it has agreed to meet with the union body that the majority of workers have chosen to represent them. At the meeting, which took place on Tuesday 12th June, adidas presented a plan to provide food aid worth approximately Rp300,000/person to all of the Kizone workers prior to Eid al-Fitr, a key holiday in the Muslim calendar, which this year falls in mid-August. (This would be approximately US$86,000 total.)

Both unions rejected this as an inadequate response, and demanded that adidas ensure workers receive full severance. In fact workers had already made clear that food vouchers were not sufficient to resolve this dispute. In a letter sent to adidas the previous week they stated;

“While we are desperately in need of any form of financial support for our families we are insulted by the idea that adidas needs to “assess” who among us is in “true need.” We earned this severance and we can assure you that our families need it. Our children are hungry but food vouchers will not keep our children in school or our families in our homes. We call on adidas to ensure we receive all the money we are legally owed and that we earned making adidas products...”

Following the meeting one worker stated that “This [offer] is not compensation or genuine care from adidas; rather, this is an insult to all of us.”

Adidas are clearly starting to feel the pressure. Last week saw a round of protests and press reports across Europe, the US and Indonesia. This week it enters into mediation with the University of Wisconsin regarding the resolution of this case.

This is the first time adidas has agreed to directly meet with the union representing most PT Kizone workers. Now we need to convince them to go further and make sure these workers are paid what they are owed.