Li & Fung, one of the largest apparel sourcing companies in the world, is refusing to pay 2.038 Hey Tekstil workers in Turkey 4.7 million EUR of overdue wages, severance, and notification payments. The conflict began in February 2012 when the last 420 of 3.000 workers from the Turkish apparel company Hey Tekstil Sanayi ve Ticaret L.Ş. were fired from the company’s Istanbul factory without notice. The workers got organized and decided to take action. At the time of the closure, workers were producing clothes for such brands as Esprit and Disney, which placed their orders through Li & Fung. For the last two years, Li & Fung had 80-90% of the production at Hey Tekstil factories, according to former Hey Tekstil representatives. 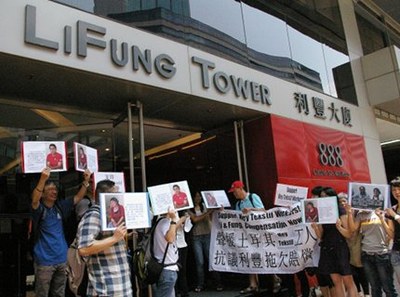 In Istanbul, Hey Tekstil employees had not received wages since November 2011.  Most of the workers had been employed by Hey Tekstil for several years or more than a decade.  Other brands they regularly produced for include H&M, adidas, Mango, Tesco and Calvin Klein.  The workers’ wages, although dependent on their length of employment, still failed to meet the poverty line in Turkey.  The workers endured 13-15 hour working days, six days a week.  According to reports from lawyers involved in the case, overtime was not paid in accordance with Turkish labour law.

Since February, the workers have staged a picket line seeking their due compensation.  In March, the workers moved their picket line to Li & Fung’s Istanbul hub office where they have been for three months.  The workers have implored brands like H&M and adidas to force Li & Fung to take action. They have pushed the Fair Labour Association (FLA), of which Hey Tekstil was a Participating Supplier, to take action.  Workers have visited the Turkish Parliament and made other political pressures—all to no avail.

In previous years, Li & Fung was the primary sourcing client of Hey Tekstil, and the business partnership between Li & Fung and Hey Tekstil helped it to expand and open several factories across Turkey.  In fall 2011 Li & Fung’s 100%-owned Turkish subsidiary, HTL Fashion, completed an acquisition of one of Hey Tekstil’s agents, Hey Trends and signed a multi-year and multi-million EUR sales and purchasing agreement.  According to Hey Tekstil representatives, they offered that Li and Fung could make a pre-payment on that agreement and directly pay the workers what they are due, but Li and Fung has refused.

The closure of the Istanbul factory in February was just the beginning: in May 2012, at all but one of Hey Tekstil’s factories were shut-down and workers were fired.  Moreover the factory’s assets were seized due to a 10-month long investigation by the Istanbul Public Prosecutor’s office into a fictitious exports scheme.  One of the founders of the company, Süreyya Bektaş was arrested along with other Hey Group executives.

Li & Fung has violated Hey Tekstil workers’ human rights by failing to ensure the thousands of workers across Turkey receive what they worked for and are legally due.

Li & Fung has also failed to meet its own obligations in its Code of Conduct to Vendors that declares “all vendors shall provide wages and benefits that comply with all applicable laws and regulations.”  The Code is supposed to be enforced through Li & Fung’s Vendor Compliance Department with announced and unannounced inspections. Hey Tekstil had been facing severe financial difficulties that should have been detected by Li & Fung’s monitoring of its compliance with Li & Fung’s Code of Conduct.

Li & Fung should have taken the necessary corrective action before over 2.000 workers were left destitute and with little legal recourse.

Furthermore, companies within Hey Group are also part of a serious criminal investigation that could further complicate matters.