by geertjan — last modified 2013-04-24 09:50
Aminul Islam, a Bangladeshi labor rights activist and former apparel worker was tortured and murdered last week in Dhaka. His body was dumped outside of the capital city and was found by local police last Thursday. According to the police report, Aminul Islam's body bore signs of brutal torture. It is most likely that Aminul was murdered because of his labour rights work. 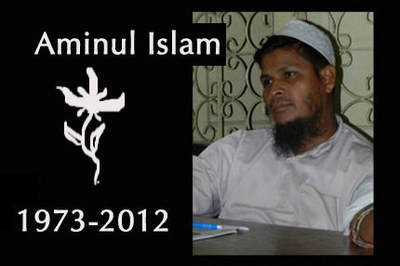 Aminul Islam worked for the Bangladesh Center for Worker Solidarity (BCWS) and the Bangladesh Garment and Industrial Workers Federation (BGIWF). He was last seen on Wednesday evening 4 April, 2012, when he left for a meeting with a worker who had called him seeking assistance. Earlier that evening, after having observed a police van parked outside, Aminul and a colleague had closed the local BCWS office fearing harassment or arrest. Aminul's family and friends searched for him until Saturday, when his wife recognised a photograph of his body, published in a local newspaper.

Repression against trade unionists and labour rights activists in Bangladesh is a serious problem, and worker protests have been met with violence many times over the last years. In particular, the wage protests of 2010 resulted in hundreds of arrests of workers and trade unionists, including Aminul Islam. In June 2010 Aminul had been detained by officials of the National Intelligence Service (NSI). According to Aminul, he was subjected to severe and repeated beatings, which his captors said would stop only if he agreed to give false testimony against his colleagues at BCWS. Dozens of labour leaders are still facing charges of instigating riots and related activities; charges regarded as baseless by international labour and human rights organisations.

CCC is calling for the Bangladeshi authorities to launch an immediate and impartial investigation into the killing and for them to work tirelessly to bring the perpetrators to justice. We are also calling on supporters worldwide, including EU missions and other organisations to generate similar pressure on the Bangladeshi authorities in order to stop the culture of impunity that has led to this tragic murder. Our heartfelt condolences go out to Aminul’s family and friends at this time.