Killer Jeans still being made 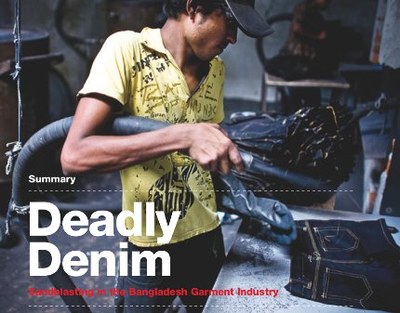 Sandblasting is a technique to give the “worn-out-look” to jeans. Many brands sourcing denim from Bangladesh have declared that they no longer use sandblasting to fade their products. The ban had been adopted by scores of brands in the last year after the process was proved to cause fatal lung diseases, including silicosis. However our new report reveals that regardless of whether a brand has ‘banned’ sandblasting or not, sandblasting  - both manual and mechanical – is still commonly used.

Our research clearly shows that not only manual but also mechanical sandblasting poses a deadly risk to Bangladeshi garment workers.

One factory owner interviewed stated that it was impossible to produce some of the designs requested without the use of sandblasting. Indeed workers said they are told to switch to using sandblasting, even if a buyer has said it is not be used, in order to meet production  deadlines. Others stated that production was often carried out at night to avoid detection by inspectors and auditors.

Workers interviewed suffered from constant coughing and breathing difficulties. They were using old machinery, and were forced to work up to twelve hours a day in dusty, poorly ventilated rooms, without adequate health and safety protection. Most interviewed had colleagues who had fallen ill. The report  highlights the lack of medical care provided to workers and the difficulties they face in getting adequate diagnosis and treatment.

The Clean Clothes Campaign and partners are now calling on brands to take more action to end all forms of sandblasting. This includes ceasing production in any unit which carries out either manual or mechanical sandblasting production, making changes to the design of the jeans and working with local trade unions and workers' rights organisations to ensure the ban is being respected.

CCC is also calling on national governments to ban the process and for the EU to introduce an import ban on sandblasted products. The CCC also wants to see the garment industry included in the World Health Organisation/International Labour Organisation work on the elimination of silicosis and to develop a national programme in Bangladesh.

The report was released at a press conference in Geneva on 29th March. Just prior to the release CCC held an experts meeting on the continued use of sandblasting in denim production and the need to develop proper models of compensation workers affected or potentially affected by silicosis. The ILO was present at the meeting as were several CCC partners and former sandblasting workers from Turkey and Bangladesh.

We are still in dialogue with the brands listed below, and other brands, about the actual implementation of the ban, verification of processes at production sites, and medical follow up and financial compensations for workers who have contracted silicosis.

Take action today, and write to these jeans brands to let them know we demand an end to sandblasted jeans right now!

Please sign the following protest letter, that will go out to the companies that refuse to take sufficient action on this issue, and thereby put the lives of thousands of workers at risk!

I have just learned about the terrible impact that the sandblasting of jeans is having on the health of those workers employed to do it.

I understand your company has yet to ban this process from its supply chain. I am calling on you to take decisive action to:

I look forward to hearing that your company has joined the global fight against sandblasting.