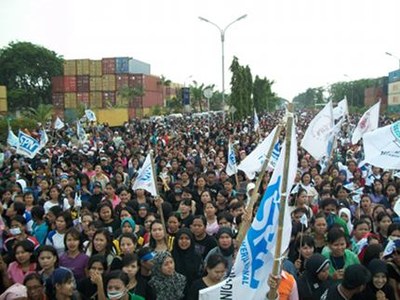 The settlement covers a period of two years and concerns workers of the workers of the PT Nikomas Gemilang IY plant.This agreement sets an important precedent. ‘This has the potential to send shockwaves through the Indonesian labor movement,’ says the union’s chairman, Bambang Wirahyoso of Indonesian trade union federation Serikat Pekerja Nasional (SPN). He continues: “Now that the precedent has been established, the leadership at SPN is gearing up to take on the fight for any workers who have been subjected to forced overtime without pay. We have only just begun’.

While the union is happy with the result, it must be noted that the malpractice existed for 18 years (which is, actually, almost as long as Nike’s code of conduct exists).  Indonesian law, however, allows redress only for the past two years. Nike uses about 30 factories in Indonesia, but other major sportswear brands like Puma, Adidas or New Balance are also using dozens of factories who produce their merchandize. Wage violations are commonplace at these workplaces too. SPN aims at concluding similar arrangements with these workplaces.

The Play Fair campaign, in which the Clean Clothes Campaign participates, has been working with Indonesian unions to address poverty wages, abuse of short-term contracts and violations of the right to organize. Last June 2011, an important agreement was signed on freedom of association between Indonesian union, major suppliers and sportswear brands like Nike, Adidas, Pentland, New Balance and Puma.

This wage settlement clearly shows that empowered unions, capable of bargaining with employers and brands, are the best way to improve workplace conditions.