That's It Sportswear fire: one year on workers still dying in unsafe buildings

by geertjan — last modified 2013-04-25 13:34
December 14 marks the first anniversary of the fire at That's It Sportswear garment factory in Bangladesh. The fire on December 14, 2010, caused the death of 29 workers, and injured a number of others, eleven of them seriously. The factory, belonging to the Hameem group, supplied US brands and retailers, including JC Penney, VF corporation, Gap, Philips Van Heusen, Abercrombie & Fitch, Carters, Kohls and Target. 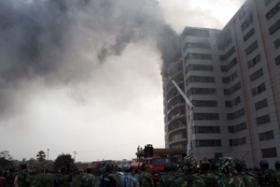 Sadly, less than two weeks ago, two more workers perished and over fifty were injured in a stampede triggered by panic after a boiler explosion at Eurotex. This brings the list of workers killed in unsafe garment factories since 2000 to at least 339. Most of the victims were producing clothes for well-known international brands when they died.

One year later, and the companies sourcing from That's it Sportswear have now paid 97% of the compensation they owed to the families of the dead workers for distress and loss of family income. However, there are still outstanding demands with regard to the provision of compensation for injured workers and the urgent need to establish a credible programme to address the serious safety issues that remain endemic in the readymade garment industry.

The fire, which broke out in what was considered a modern building, was, like so many others, caused by an electrical short-circuit and substandard wiring. It was reported that proper fire drills were not carried out, that the exits were blocked, that the workplace was not properly supervised and that the company only had a permit for the lower floors. When the fire broke out on the ninth floor, fire fighters were powerless to help because their ladders couldn’t reach beyond the fifth floor and helicopters were unable to land because the rooftop had illegally been turned into a canteen. Moreover, the workers were effectively denied the right of freedom of association which would have allowed them to play a role in addressing some of these violations in advance of the tragedy. Many who tried to escape from the windows fell to their deaths.

In response to the disaster at That's It Sportswear, representative unions in Bangladesh belonging to the BNC and the Unity Council agreed a comprehensive set of demands based on established best practice and on an assessment of what the industry could support. These demands also took into account the absence of a proper compensation scheme and the principle that buyers in general bear greater responsibility when they do not have adequate systems for detecting and addressing deficiencies in worker safety.

These demands had the support of local NGOs, the International Textile, Garment and Leather Workers Federation (ITGLWF) and international labour rights groups such as the Clean Clothes Campaign, the Worker Rights Consortium, the Maquila Solidarity Network and the International Labor Rights Forum.

While unions and labour rights groups insisted on the importance of providing adequate compensation to those affected, they also demanded adequate steps to monitor safety and address any deficiencies across the garment sector.  The demands for safety improvements include the immediate implementation of a safety programme that would include the revision of current safety standards; thorough, independent, well-funded and publicly-transparent safety inspections of all multi-story supplier factories; the remediation of identified safety deficiencies; the training of management, security personnel and workers in health and safety issues; the establishment of mechanisms for dialogue between unions and employers and functioning health and safety committees in every factory.

The demands for compensation include redress for pain and suffering and compensation for loss of income of a family breadwinner. The families of each of the deceased workers should receive 1.7 million taka (approx. 17.000 Euro).  The injured workers should receive payment of medical costs, compensation for pain and suffering plus an amount depending on the seriousness of the injuries. This compensation should be provided by brands (45%), the factory owner (28%), the Bangladesh Garment Manufacturers and Exporters Association (BGMEA) (18%) and the government (9%). In addition to providing a share of the compensation, the brands were asked to work with the BGMEA and Hameem to ensure the workers demands were met in full.

We are pleased to report that most of the brands sourcing from Hameem have contributed the portion requested of them in respect of the families of the deceased workers and have worked with Hameem to determine to what extent the workers’ needs are being met.

However, they have now stepped away from their responsibility to comply with further demands such as the provision of compensation for the injured workers. With regard to the safety programme it is a grave concern that, despite their prior commitments, the brands sourcing from Hameem, with the exception of Gap, have failed to respond to the demands for a credible programme to address the inherent unsafety of the readymade garment industry.

For its part, Hameem has paid some 274,000 USD,  which includes elements of compensation, burial costs, medical costs, payment of wages to the incapacitated workers and the education of the children of the deceased. However, it has only contributed about 40% of its portion of the compensation demands for the deceased workers and several other demands are still outstanding. BGMEA meanwhile has paid only 20% of its share of the compensation demand. The government covered burial costs but has not provided compensation.

On the 3rd of December Jesmin Akter, 20 years old and employed as a helper, and Taslima Akter, 22 years old and employed as an operator, were trampled to death after a panic broke out following a boiler explosion on the second floor of the Eurotex Ltd factory in Old Dhaka. Another 62 workers were injured, and on December 8 11 workers remained in hospital. Several international buyers had already identified concerns in regard to safety risks at the factory, which around the time of the incident was producing for a number of global brands including Tommy Hilfiger (owned by the US company Philips van Heusen), Zara (owned by the Spanish company Inditex), Gap (US), and Groupe Dynamite Boutique Inc (Canadian) - either directly or via subcontracting

Eye witness reports state that one the day of the incident, atround 1:15 pm workers reported a problem with the boiler on the second floor. Reports vary on exactly what happened, some witnesses reported seeing vapor escaping from the boiler, others say they heard an explosion. Workers were employed on the second to sixth floor of the factory and as rumors spread through the factory that a fire had broken out many panicked and rushed to leave the building. Workers report that the stampede led to overcrowding on the stairs down to the first floor, resulting in the collapse of a stair rail and a number of workers falling. Reports suggest that the fire doors at the bottom of the stairs were locked, contributing to the stampede and over-crowding on the stair case. One worker reported that at first the gates were open, but were closed by a factory manager, who was urging people to return to work saying that nothing had happened. This witness claims the injuries and deaths were caused when workers started to rush back up the stairs pushing back against those coming down.