by geertjan — last modified 2013-04-24 09:51
Ongoing talks between the former M&S supplier, Viva Global and the Garment and Allied Workers Union have broken down after five union members employed at the factory were attacked with a cane and a knife by a security guard employed by the company. 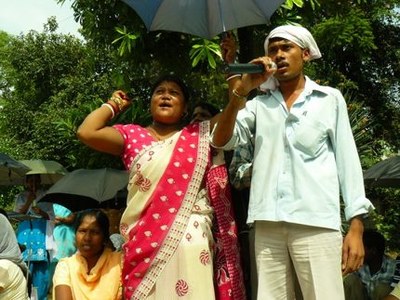 In May we reported that 42 workers had been reinstated at the Viva Global factory, based in Gurgaon, India several months after almost 100 workers were attacked and then locked out of their workplace. In the two months since the 42 workers were reinstated GAWU have been engaged in talks with VG management aimed at resolving labour issues at the factory and providing reinstatment for a further 40 workers. This new, violent attack on GAWU members suggest that the negotiations initally agreed to by Viva Global have not been carried out in good faith.

Attempts to involve M&S in finding a solution to the case have also failed. After announcing their decision to cut orders from the factory, M&S stated that they would remain in contact with Viva Global and attempt to help resolve the dispute. Earlier this year they hinted they might be willing to replace orders should the negotiations succeed and quality issues be resolved. However M&S now acknowledge that they have had no contact with the factory since orders were cut and state that they have no intention of renewing their relationship again whatever the final outcome.

The workers will now return to the court process to demand compensation for an illegal lock out.

GAWU report that on 28th June 2011, VG manager Mr. Mahesh Sharma - who was personally involved in the ongoing negotiation with GAWU - sent a note to the shopfloor asking five female workers to go to his office, where they were informed that they had been suspended from duty. No information was given to them regarding the reason for their dismissal.

When the five workers protested at this unfair treatment a female security guard, who workers claim has been employed specifically to harass union members, started to swear at them. Using a cane given to her by Mr Sharma she proceeded to beat them. The guard also used a knife against the women, hit them with her fist and dragged them by their hair.

The workers shouted for help after which the security guard was instructed to lock the exits, preventing the women workers from escaping. The police arrived at the factory just as workers leaving a nearby factory were attempting to reach the women by kicking down the gate. Once on the scene the police demanded that the gate was opened but refused to take a complaint from workers until they had received hospital treatment. They also refused to accompany the workers to hospital. Luckily none of the workers were seriously injured.

Later that evening Viva Global workers marched to the police station and demanded that the police register a complaint in regard to the incident.  The police initailly refused to take action claiming that Viva Global had themselves filed a police complaint  claiming that ten workers had attempted to attack the  female security guard. This complaint had been filed at 3pm, over two hours before the incident took place. Following ongoing protests the workers were finally allowed to submit their allegations.