by geertjan — last modified 2013-04-25 13:28
A historic agreement which follows two years of negotiations after the Playfair 2008 campaign was signed. The pact which addresses core labour rights issues in Indonesian factories was signed by Indonesian textile, clothing and footwear unions, major supplier factories and the major sportswear brands, including Adidas, Nike and Puma. 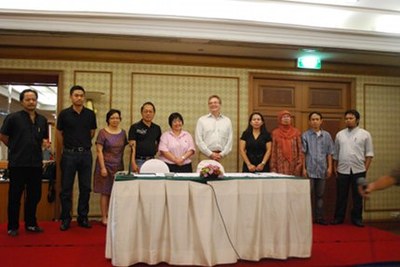 The campaign released a report "Clearing the Hurdles", which identified low wages; abuse of short-term contracts and other forms of precarious employment; violations of freedom of association; and factory closures due to industry restructuring as the four hurdles to overcome.

The report and the detailed targets in the report formed the basis of a three day long conference in Hong Kong (June 2008), between the Play Fair Alliance and the main brands driving the sporting industry, including Nike, Adidas, New Balance, Umbro and Speedo, to discuss workers' wages and working conditions in the sportswear industry.

At this meeting, it was agreed that the discussion needed to move from a global level (like the discussions around the sectoral framework agreement) to the national level to find solutions to workplace issues.

Workers in Indonesia and in other countries producing sportswear are frequently prevented from organizing at sportswear supplier factories and from carrying out union activities. Recent research covering 18 factories in Indonesia found that all had taken anti-union measures.

The first two-day workshop was held in November 2009 in Jakarta in which various Indonesian unions, a few large sports shoe manufacturers, the main international brands, and representatives from the (global) Play Fair alliance participated. At this meeting, the Indonesian unions presented their main concerns regarding contract work, wages and freedom of association. Although two major brands – Nike and Adidas – showed willingness to reduce the use of contract labour in their supplier factories, little concrete progress on this issue was made at the meeting. The discussion on wage was effectively stonewalled.

The major brands did commit to delivering improvements in the exercise of freedom of association. It was agreed that a joint protocol between Indonesian Textile, Clothing and Footwear unions, brands and suppliers would be developed that would better define the activities of unions in the workplace. An action plan was drawn up to carry forward a process of negotiating a protocol on freedom of association. Five unions established a negotiation group that worked to prepare a common position.

The brands authorized Adidas to speak for the brands (Puma, New Balance, Nike and Pentland, -other brands will be invited to sign later). The suppliers also participated in the negotiations even though they tend to remain silent during these meetings.

Indeed without the leverage exercised by Nike and Adidas (in particular), it would be very unlikely that the manufacturers would have been prepared to enter into negotiations with Indonesian unions. The Dutch trade union solidarity organisation FNV Mondiaal supported the process along the way.

Finally, after two years of negotiations, meetings and many many discussions an agreement has been reached. The Protocol consists of 12 articles, dealing with implementation

The signing of this freedom of association protocol is an important first step in improving the situation for the hundreds of thousands of sportswear workers facing low wages and poor conditions but the real test, however, will be in its implementation.