by geertjan — last modified 2013-04-24 09:51
Thanks to all of you for taking the time to contact the Thai government and request the release of the well-known Thai human-rights activist and journalist Somyot Pruksakasemsuk, who was arrested on April 30 on charges of lèse majesté, or the crime of insulting the king. Please also support this new appeal. 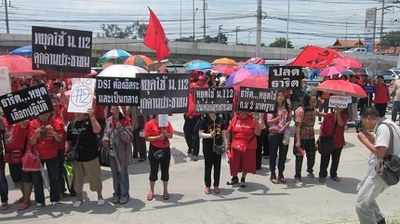 This accusation can lead to a maximum of 15 years in prison and is criticised for being used to silence political opponents and human-rights activists. Thousands of organisations and inviduals have joined the first appeal after it was published on May 11, but more pressure is necessary as Somyot remains in jail without a trial date having been set, and the court continues to refuse bail.

Lese Majeste has been widely used to silence labour- and pro-democracy groups and activists. Between 2008 and 2011 an estimated 500 cases were brought to court. On April 28,  Somyot participated in the launch of a campaign to collect 10,000 signatures to remove the lese majeste article from the Thai criminal code. It is assumed that this the immediate cause of his arrest, although the arrest warrant against Somyot apparently dates from February this year.

On May 31 about 40 Thai unionists went to the Government House, and presented the letters from international organisations and supporters which call for release of Somyot.

"Everyone who is accused of law violation has the right to bail and to prepare his responses. Thai Constitution also guarantees this right", said Mr Phromma, textile union leader and speaker for the group. The letters were received by Director of Grievances Centre at Government House, Mr Phansak Charoen, who said he would handed these letters to the Prime Minister.

Thai local groups also organized protests in front of the office of the Department for Special Investigation (DSI), who arrested Somyot, and at the prison. On May 23, the Thai National Human Rights Commission  (NHRC) sub-committee on civil and political rights says it will begin a study on whether the content and current use of the Criminal Code’s lese majeste clause, Article 112, is constitutional. The NHRC sub-committee held its first hearing on the problem of the application of the lese majeste law on May 17, and will examine human rights abuses in the cases of Somyot and Somsak Jeamteerasakul, a senior historian at Thammasat University who was also to arrested recently for lese majeste.

Update: This appeal is now closed.

Please add your voice to those calling for the immediate release of Somyot by organizing an action in coming weeks in front of a Thai embassy (don't forget to send us the picture!) and by contacting the Thai embassy in Brussels (Belgium) or the Washington (USA) via the form below. You can of course also contact the Thai embassy in your own country, using the letter below as model. In this case please send us a copy of your letter.

I write to ask you for the immediate release of Somyot Pruksakasemsuk who was arrested on April 30, 2011, and is currently being held at Klong Prem Central Prison in Bangkok.

Somyot is an active labour- and human rights activist, who is well known for his work for the international trade union movement. He is a loyal Thai citizen who is strongly committed to Human Rights in his role as an academic and activist promoting freedom of speech.

I understand that Somyot was arrested on a charge of defaming, insulting and threatening the King, Queen and Heir-apparent (Section 112 of the Penal Code), a charge which he fully denies. He also was not aware that any arrest warrant had previously been issued and strongly denies any claim that he resisted arrest. He believes that his arrest was due to the effort by him and other pro democracy activists to collect the 10,000 signatures needed to table for a repeal of section 112 of the Criminal Code/Lese Majeste Law  in parliament. This action was done in a peaceful manner and according to the procedure prescribed by the 2007 Constitution.

We are concerned about the current state of human rights and democracy in Thailand, where even peaceful and legal methods to express one’s views are suppressed and denied. We believe that the country should move towards a genuine reconciliation in good faith and intention from all sides. Therefore any dissident voice should not be brutally suppressed, particularly prior to a national election.  The arrest of Somyot for his peaceful activity will deter this process.

I further understand that bail so far has been denied, and no trial date has been set,  something I believe to be an unacceptable abuse of Somyot's human rights. Please urgently respond to this request for the immediate release of Somyot to allow him to organise his response to the charges against him.