by geertjan — last modified 2013-04-29 15:53
42 workers from the Viva Global factory in Gurgaon, India have returned to work over six months after they were locked out following a violent attack on union members. 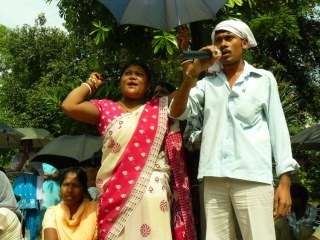 Their return comes after Viva Global signed an agreement on 29th March which promised to reinstate all the workers locked out last August. The agreement was signed under the supervision of the Deputy Labour Commissioner , after Viva Global were ordered by the High Court of Chandigarh, to resolve the dispute.

Since the horrific events of last August, when union leader Anwar Ansari was kidnapped and 102 workers were attacked outside the factory, the workers from Viva Global have continued to fight for their reinstatement.

This demand was made more difficult by the decision of the main buyer, Marks and Spencer, to withdraw from the factory. The retailer announced their decision to the Observer newspaper and claimed that orders had been cut months previously for “business reasons.” The owner of Viva Global, Mr Vohra told the Indian press that the withdrawal was directly related to the dispute. Shortly after the announcement Viva Global downsized its workforce.

M&S never informed the Clean Clothes Campaign UK (Labour Behind the Label) or the union that they were planning to cut orders, although they had been in regular contact in regard to worker violations for the previous six months. M&S reassured campaigners that they would continue to work for a resolution to the case, but have since ceased communication with CCC or the GAWU union.

Undeterred by the refusal of M&S to play a constructive role in the resolution , the workers decided to take their case to the High Court claiming that Viva Global's actions constituted an illegal lock out. Thanks to the strength of determination of these workers there is now a possibility that the events of the last year may finally have a positive outcome.

The Clean Clothes Campaign continues to keep in touch with workers at Viva Global and will be monitoring the ongoing adjudication process and any further developments at the factory.