by geertjan — last modified 2013-04-24 09:51
We need your support to demand the immediate release of the well-known Thai human-rights activist and journalist Somyot Pruksakasemsuk. He was arrested on April 30 on charges of lèse majesté, or the crime of insulting the king. This accusation can lead to a maximum of 15 years in prison and is criticised for being used to silence political opponents and human-rights activists. The Clean Clothes Campaign signals that charges of lèse majesté have over the last two years increasingly been used to silence labour-rights activists. 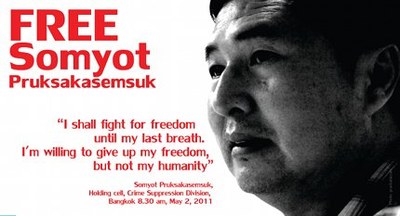 Update: this appeal is now closed.

Last year Somyot was arrested and detained for three weeks for holding a news conference where he and others called for the resignation of Prime Minister Abhisit Vejjajiva following the bloody repression of red-shirt protesters in 2010. Clean Clothes Campaign supporters worldwide sent protest letters against his arrest to the Thai government. Soon afterwards, he was released.

We understand that this time the launch on April 28 of a campaign to collect 10,000 signatures to remove the lese majeste article from the Thai criminal code was the immediate cause of his arrest, although the arrest warrant against Somyot apparently dates from February this year. He denies the charges of lese majeste, and was never informed about an arrest warrant issued against him, let alone that he tried to flee the country in an effort to escape his arrest, as was claimed by the authorities. Still, he has been refused bail, and the Criminal Court agreed with the Department of Special Investigation to extend the detention of Somyot until May 13.

Somyot is founder of the Center for Labour and International Solidarity Thailand (CLIST) and worked with the CCC on numerous campaigns and Urgent Appeals, including the landmark Eden case in the mid-nineties and the MSP case in 2006. He worked as a project coordinator for the International Chemical, Engineering and Mining Union Federation (ICEM) before devoting his time more exclusively to journalism and human-rights activism. The CCC joins the Asia Floor Wage campaign, Asia Pacific Worker Solidarity Links, AMRC and labour unions in Asia in calling for his immediate release.

I write to ask you for the immediate release of Somyot Pruksakasemsuk who was arrested on April 30, 2011, and is currently being held at Klong Prem Central Prison in Bangkok.

Somyot is an active labour- and human rights activist, who is well known for his work for the international trade union movement. He is a loyal Thai citizen who is strongly committed to Human Rights in his role as an academic and activist promoting freedom of speech.

I understand that Somyot was arrested on a charge of defaming, insulting and threatening the King, Queen and Heir-apparent (Section 112 of the Penal Code), a charge which he fully denies. He also was not aware that any arrest warrant had previously been issued and strongly denies any claim that he resisted arrest.

I further understand that the Criminal Court agreed with the Department of Special Investigation (DSI) on May 2 to refuse bail and extend the detention of Somyot for another twelve days, something I believe to be an unacceptable abuse of Somyot's human rights.

Please urgently respond to this request for the immediate release of Somyot to allow him to organise his response to the charges against him.