by geertjan — last modified 2013-04-25 13:25
After months of intense struggle, unions and employers reached an agreement to increase wages in Cambodia. The agreement follows months of unprecedented labour activism. In Cambodia, a rapidly growing garment industry has become the most important industrial sector and income-earner. 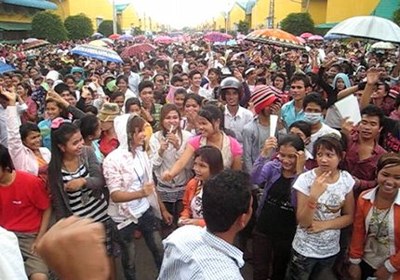 The Coalition of Cambodian Apparel Workers Democratic Union (CCAWDU), a partner of the CCC, and others initiated a nationwide garment workers strike in September last year to demand a minimum wage equivalent to US$ 93 per month. Studies indicate that this amount is the necessary minimum for a sole income earner to provide for a family of four.

The strike was a great success: on the third day an estimated 200,000 workers participated, making it one of the largest garment-workers strikes ever, and the largest strike in Cambodian history.

However, when the strikers wanted to return to work, there were massive retaliations by the factory owners, resulting in the illegal dismissal of hundreds of workers. Please continue to support our Urgent Appeal to factories that still haven't allowed all strikers back into the factory.

Five rounds of negotiation were held to agree on the level of benefits, such as attendance and seniority bonus. On March 7, an agreement was reached which gives the workers on average US$ 10 extra. Given that the minimum wage is currently set at US$ 61, this represents an increase of more than 10 percent.

The CCC and CCAWDU welcome these results. We will keep urging global brands sourcing from Cambodia to ensure garment workers receive a living wage.