by geertjan — last modified 2013-04-25 13:25
Thanks to all of you who took action after our appeal in January: since then over a 160 workers who had been dismissed after striking for better wages have got their jobs back. Pressure on international brands that subcontract production to these factories, like Gap, H&M and Zara, has yielded substantial results, but more remains to be done. 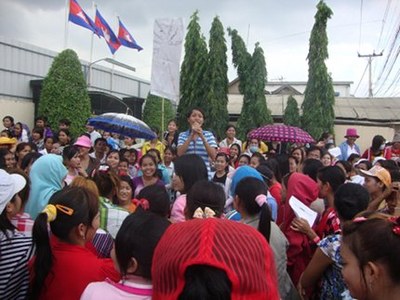 In February, H&M and Inditex managed to convince one of their Cambodian suppliers, Goldfame, to sign an agreement and accept back around 160 employees. International action, including your email signatures, has helped to make a difference! As of early April, 112 of these workers are back at their jobs in the factory, the others had already found other jobs or can't be traced. Several workers were also reinstated in other factories.

Unfortunately, another 141 workers from 13 garment factories are still locked outside the factory doors - more than six months since they went on strike. They continue to fight for their rights and demand to be reinstated and paid their salaries from September last year, when they were illegally dismissed. There should also be an immediate halt to court cases against union members and trade unions, that seem intended to intimidate the workers. Meetings involving key stakeholders in Cambodia are presently going on, we will keep you posted about the outcomes and let you know when your action is once more necessary!

Your signatures remain urgently needed to support unfairly dismissed Cambodian garment workers. The CCC contacted international brands and retailers that outsource production to Cambodia: they must use their influence to get these workers reinstated. But little progress has been made. H&M, Zara and Gap have approached factory managers, but Cambodian unions and the CCC feel that they could do much more to ensure immediate reinstatement, with pay-back of wages for the time these people have been robbed of their income.

The workers downed their tools in September last year to support trade unions in ongoing minimum-wage negotiations. They were dismissed from their factories as a consequence.  Since then, efforts to get them reinstated have remained without success, despite a court order and the government calling on employers that the workers should be allowed to return to work.

Gap, Zara and H&M source from a large number of the involved factories. Please take action and demand that these workers are allowed to return to work immediately, with compensation paid for the time they have been dismissed.

These workers, many of whom are trade-union leaders, have been fighting for reinstatement since they were prevented from returning to work on September 18, 2010. The sackings and suspensions are believed to be in retaliation for their participation in a nation-wide strike to demand a minimum monthly wage of US$ 93. This is considered to be the minimal “living wage” as calculated by labour groups and unions in the country.

The strike lasted for three days and received massive support from workers: on the last day over 200,000 workers from around 90 factories joined the protest. It was called to an end by union leaders after the Ministry of Social Affairs invited them for a meeting to discuss their demands. However, when the garment workers arrived for work they were confronted with mass dismissals of unionised workers who had participated in the strike,  and dozens of legal cases filed against union leaders.

The actions of the employers are in contravention of the Cambodian constitution and labour laws. Thy also violate the International Labour Organization conventions on Freedom of Association and Collective Bargaining. The Cambodia government responded by issuing a sub-degree urging employers to drop the court cases and calling on them to return to the negotiating table. It also stated it would not allow workers to be dismissed.

At the start of October, the courts issued a warrant ordering employers to reinstate the dismissed and suspended workers within 48 hours. The employers appealed and the case is still pending. Many employers have so far refused to abide by the government or court calls and have not allowed workers to return to their jobs.

Since September the Clean Clothes Campaign has been calling on most of the global brands that outsource to these factories to demand that workers are reinstated immediately and unconditionally and that the owners enter into good faith negotiations with the trade unions.

Although some brands have taken some steps towards this, their actions have been insufficient to have an impact on the ground. They need to step up their efforts immediately to ensure workers are not made to suffer any longer simply for legally exercising their right to strike.

H&M and Zara are amongst the companies that normally have the largest orders in Cambodia. Take action now and sign on to our emails to these brands. We also include Gap in our appeal. Not only do they have significant orders in a factory where 18 strikers are still out on the streets, but their supplier, garment factory United Apparel, is also involved in a serious human-rights case against a unionist, Mr. Sous Chantha.

Letter to H&M, GAP and Zara

I am writing in regard to the 141 Cambodian workers who are waiting for reinstatement almost two months after they were dismissed following the national strike for decent wages in September. A number of trade union leaders are still facing spurious legal charges resulting from their participation in this strike. This is despite the government of Cambodia issuing a statement opposing the dismissals and a warrant urging these cases to be dropped.

I understand that your company has contacted your suppliers to express your concern, but these steps have clearly not been enough to bring justice for these workers. Your company is a significant buyer from Cambodia in general and these factories in particular. Your code of conduct commits you to upholding the rights of all workers in your supply chain to freedom of association.

I therefore urge you to take stronger action to ensure that: