by geertjan — last modified 2013-04-24 16:03
On November 18th Sous Chantha, a trade union leader, was arrested and charged with drug trafficking. Coalition of Cambodian Apparel Workers Democratic Unions (C.CAWDU) believes this arrest to be a frame-up in order to disturb his union activities. Sous Chanta risks 2 to 5 years in jail. 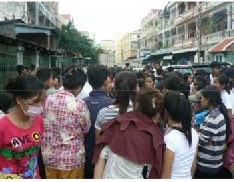 A more detailed report from LICADHU, the Cambodian League for the Promotion and Defence of Human Rights, who supports Sous Chanta and believes there is no evidence to charge Chantha with drugs trafficking, can be downloaded here.

Meanwhile, hundreds of Cambodian workers are still waiting for reinstatement three months after they were dismissed following the national strike for decent wages which lasted from September 13 until September 16 (see earlier updates to the right).

While progress have been made in 8 factories where workers and union leaders have been reinstated, there are still 379 suspended and dismissed workers from 16 factories waiting for justice. These workers have been locked out from their workplaces for almost three months and face huge financial difficulties. They are punished for participation in the strike and demanding a living wage.

A number of trade union leaders are still facing spurious legal charges resulting from their participation in this strike. This is despite from the government of Cambodia issuing a statement opposing the dismissals and a warrant urging these cases to be dropped.

Employers continue to refuse to enter into negotiation

The CCC has asked buyers to urge their suppliers to drop legal charges and reinstate all workers immediately and unconditionally, with back pay calculated on average monthly incomes. In addition, the employers, represented by the Garment Manufacturers Organisation of Cambodia (GMAC), keep dragging their feet with regard to entering into negotiations with the unions and the government on the wage issue, even though the government and unions want negotiation to start in December.

The CCC has issued an public appeal to GMAC to immediately reinstate all suspended and dismissed workers and their leaders with all back-wages paid.