by geertjan — last modified 2013-04-24 09:51
On June 16 2010, a staff member of the Bangladesh Center for Workers Solidarity (BCWS) was detained and severely beaten by Bangladeshi security forces. This occurred just two weeks after BCWS was arbitrarily stripped of its legal status as an NGO. Take action today to support BCWS staff. 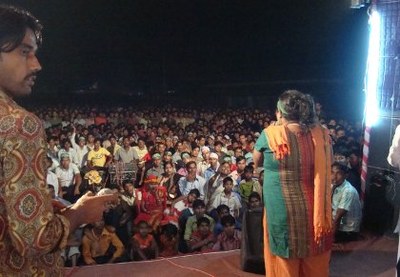 (update: this appeal is now closed)

The government stripped BCWS of their NGO registration at the beginning of June 2010, accusing them of inciting unrest in garment factories. They also ordered the confiscation of its property and the freezing of its bank account.  Two weeks later a BCWS staff member was detained by National Security Intelligence officers. He was severely beaten before he managed to escape.

BCWS are an internationally renowned labour organisation who were carrying out legitimate organising work. There is no evidence linking them to the unrest that has rocked the industry for several months. Rather, the timing of events suggests that this crackdown against BCWS may be taking place at the behest of a garment factory where workers are attempting to form an independent union.

Over recent weeks thousands of garment workers have been  taking to the streets to demand a tripling of the minimum wage to 27 euro-cents per hour. By accusing BCWS of “fomenting unrest and agitation in the garment sector,” the government is signalling that they are not prepared to take seriously the struggles and demands of garment workers, who survive on starvation wages despite working long hours producing for the world's biggest brands.

Who is the Bangladesh Center for Worker Solidarity?

The Bangladesh Center for Worker Solidarity (BCWS) was founded in 2001 by two former child garment workers in Bangladesh. Their aim is to promote worker rights and “establish a congenial atmosphere in the working place to increase productivity and contribute to the national economy.” A non-political non-governmental organization, BCWS is widely known for its credible research on labour rights compliance in the ready-made-garment factories and is committed to lawful means of redressing labour rights violations.

BCWS maintains programs on labour rights awareness raising, leadership training, and conflict resolution. In addition, it provides mid-level management workshops, and runs a night school as well as a model daycare centre for children of garment workers. Thanks to the work of BCWS many workers can enjoy their legal benefits, including maternity leave, and exercise their right to form and join workers’ associations.

The Bangladesh Center for Worker Solidarity (BCWS) has long had to contend with Bangladeshi government repression and surveillance as security forces tap their phone lines, monitor their emails, and sometimes search their offices. However, the current crackdown is the harshest yet, threatening BCWS’s existence and putting staff and organizational leaders in serious physical danger.

When, on June 3rd, 2010, the NGO Affairs Bureau (NAB) of the government of Bangladesh cancelled the non-governmental (NGO) registration of BCWS, it deprived it of its legal right to exist and operate. At the same time, the Director General of NAB ordered government officials to seize the BCWS office and property and also instructed their bank manager to close their foreign donations bank account, preventing it from continuing important work funded by international donors.  A daily newspaper reported that the government was to “prepare a list of cash foreign donations and the movable /immovable properties procured through foreign donations and take them under government control/possession.”

On June 16, 2010, at 1:50 pm Bangladesh time, BCWS staff member Aminul Islam was detained at the offices of the Director of Labour as he was arriving for a scheduled meeting with the Chief Inspector of Factories to discuss worker unrest at garment factories owned by the president of the Bangladesh Garment Manufacturers and Exporters Association (BGMEA). Also invited to the meeting were 30 garment workers, four other staff members of BCWS, and two representatives of the BGMEA. The Chief Inspector of Factories reportedly had received special permission from the Labour Minister to hold the meeting despite the fact that the government no longer recognized BCWS as a legal entity.

As Mr. Islam and the workers ascended the staircase to the Labour Director’s office, 30-35 National Security Intelligence (NSI) police arrived from a back entrance and detained Mr. Islam along with three workers. According to Mr. Islam’s testimony, he managed to escape custody late at night the same day while being transported to another district.  Mr. Islam reports that the NSI officers blindfolded him, and beat him and threatened to kill him in an attempt to extort false testimony against BCWS.

“Why did you stop work at the garment factories?” NSI officers demanded of Mr. Islam. “If you just say Babul and Kalpona (leaders of BCWS) asked you to stop the work at the factory then we will set you free.”  When Mr. Islam responded that BCWS never told workers to stop working and that Babul and Kalpona would “never support any illegal task or unlawful demand” he was beaten unconscious.  “They were hurting me at the joints of bones of my body. My arm, knee, joints, ball-joints were their targets.” Mr. Islam’s testimony continues in excruciating detail, describing the beatings and threats to kill him and orphan his children, and covering up his killing in a so called “cross-fire” incident.

Mr. Islam is exhausted as he ends his testimony. “Now I’m living in extreme anxiety,” he says. “I don’t even know what I should do now.  I can’t walk. I can’t even move because of the pain that I got from the beating. I can’t sleep. Nightmares of torture won’t let me sleep.”

Mr. Islam’s escape from the NSI officers on June 16 was not the end of this crisis for BCWS. As his testimony reveals, the real targets of the security forces are the leaders of BCWS who have worked tirelessly to support workers’ rights in recent years. On July 2, BCWS reported that their staff were scared but still coming to the office, despite harassment from security police. Because of the trouble their landlord increased their rent by 60%.  Mr. Islam still had not returned home, but was finally able to see his wife and children.

On July 22, BCWS reported that “our phone is still tapped, and we are being followed, getting many visits and phone calls from security intelligence.”  BCWS staff and leaders remain at risk of unlawful detention and possible inhumane and degrading treatment at the hand of the authorities. As of this writing, BCWS legal status has not been restored though the government has not yet ceased their offices and properties.

Why is BCWS targeted?

Is one factory responsible?

The immediate cause of the cancellation of BCWS’s legal status appears to be related to BCWS supporting workers in their effort to form an independent trade union at one particular garment factory. After harassment of union leaders, workers contacted BCWS in April, 2010, to receive support and help to resolve the conflict at the factory.

The company owners are retired military officers, who may have used their political influence to have BCWS's non-governmental organization registration revoked. While NAB did not officially notify BCWS of the cancellation of their legal status until June 10, this factory knew about it earlier, and informed its workers on June 6—four days before BCWS received official notification—that they expected BCWS to be closed down.

On June 19, three days after Mr. Islam was detained and beaten by national security police, this factory reportedly filed criminal charges against two members of the BCWS staff, including Mr. Islam, and 57 workers, claiming they had beaten managers, vandalized the factory, and stolen property.  As of this writing, BCWS is reporting continued unrest at the  factory, including the beating of workers by “local goons” both inside and outside their workplace.  On July 22, an estimated 40 workers were injured at this factory, according to  news broadcasts on Bangladeshi television.

Undermining the legitimacy and credibility of workers’ demands for higher wages

Targeting BCWS serves to trivialize workers’ demands for better working conditions and higher wages.  The legal minimum wage in Bangladesh is the lowest in the world at about 18 euros per month (1,662.50 Bangladeshi takas), forcing garment workers to subsist on starvation wages.

According to a Bangladeshi non-governmental research organization, the “minimum requirement for basic living” in cities such as Dhaka and Chittagong is 1,805 calories per day. In 2006, when the 18 euros per month minimum wage was adopted, they estimated the cost per month, per person, for food sufficient to meet this calorie intake was 15 euros. Since 2006, the prices of almost all essential food items have doubled, and in some cases tripled. That means garment workers who earn the minimum wage today do not even earn enough to feed themselves, let alone pay for other basic necessities for themselves and their children. That is why workers are now taking to the streets in the tens of thousands, shutting down factories, and demanding a tripling of the minimum wage to the still very modest 54 euros per month (5,000 Bangladeshi takas).

It is no wonder that garment workers struggling for their survival are demanding more money. But it easier for the government to blame worker organisations like BCWS, implying that workers’ demands are not as a result of genuine grievance, but as a result of manipulation by other forces.  As though garment workers needed any provocation to demand their right to survival.

In its official NGO cancellation notification to BCWS, the government accuses BCWS of “inciting to create riotous situation and assisting in creating labour unrest in the ready-made garment sector, and in anti-state and social activities” An official government brief accuses two BCWS leaders of “fomenting unrest and agitation in the garments sector.”  Instead of recognizing workers’ real human needs and basic right for a dignified wage, the government is reportedly considering adding to its apparatus of repression by forming a new “industrial police” specifically for the ready-made-garments sector. According to a Bangladeshi daily newspaper this new police force would use an “iron hand” to deal with worker unrest, a chilling message indeed.

(This appeal is now closed)

While BCWS has kept us apprised of developments over the last month and a half they have waited to appeal for your help until now, seeking first to exhaust every possible local remedy. Now they have reached the point where they are appealing to people of conscience the world over to support them in their struggles for garment workers’ basic rights and survival.

I write to express grave concern regarding the increasing harassment against the Bangladesh Center for Worker Solidarity (BCWS).
I am particularly alarmed to hear of the  unjust detention and beating of Aminul Islam, who was held in NSI (National Security Intelligence) custody on June 16, 2010, and the de-registration of BCWS at the NGO Affairs Bureau on June 3rd 2010.

It is my understanding that BCWS and Mr. Islam have been accused by your government of inciting worker unrest.  However, BCWS is an internationally known and well respected advocate for workers’ rights with a strong record in credible research and professionalism.

As you are well aware, the recent demonstrations by Bangladesh Garment workers were provoked by the poverty wages paid to workers in the industry. The demand of the workers for this to be increased to a dignified level is reasonable and fair.  While the resulting unrest  may have caused some stress to the Bangladeshi government, it is unacceptable for you to target organizations like BCWS.

Therefore I respectfully call upon your government to: