by geertjan — last modified 2013-04-24 09:51
April 11 marks the fifth anniversary of the collapse of the Spectrum/Shahriyar Sweater factory in Bangladesh, which killed 64 workers and injured 80, 54 of whom were seriously injured. The Spectrum collapse focused global attention on the chronic safety problems in the Bangladesh garment industry. To mark the anniversary of the Spectrum collapse, the CCC, the Maquila Solidarity Network (Canada), and the International Labor Rights Forum (USA) call upon all buyers sourcing garments in Bangladesh to take proactive, sustained, and coordinated measures to help eliminate these systemic problems. 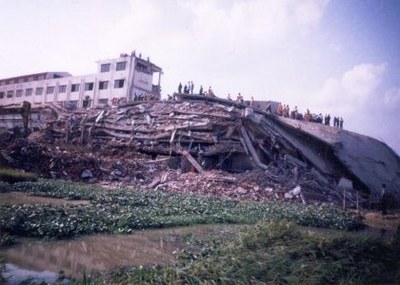 In February this year, a large fire at the Garib & Garib Sweater Ltd factory in Bangladesh sadly took the lives of 21 workers and injured another 50. This new drama is a brutal reminder that five years since the Spectrum disaster, effective and proactive action is still lacking to ensure that garment workers in Bangladesh can go to work without fearing for their lives.

The Banladeshi garment is notorious for its bad safety record. Within a year of the Spectrum collapse around 65 workers in KTS Textiles and Sayem Fashions lost their lives. Two weeks after the Garib & Garib fire another worker lost her life in yet another factory, Matrix Sweater. Between 2005  and 2010, at least 172 workers were killed. Most of the victims were producing clothes for well-known international brands when they died.

More could have been done by all concerned to prevent these disasters from occurring. More needs to be done to ensure further disasters are prevented.

In consultation with Bangladeshi unions and the US-based Worker Rights Consortium, and incorporating proposals developed earlier by the International Textile, Garment and Leather Workers Federation (ITGLWF), we have compiled a list of actions that companies sourcing garments from Bangladesh should take within their own supply chain to prevent future tragedies. We are also asking that companies to collectively press the Government of Bangladesh and the BGMEA to take specific actions to address these problems industry-wide in Bangladesh.

We have sent this list to all brands known to have sourced garments from factories where major health and safety incidents have occurred in recent years. See here for a full list of companies contacted so far.

We also call upon  international brands sourcing from factories where recent disasters occurred to ensure that victims and their families receive fair and timely compensation.  Please read more to find an update on the current situation regarding the Spectrum Relief Scheme, which was set up by former buyer Inditex (Zara), cooperating with the International Textile, Garment and Leather Workers Federation (ITGLWF). Unfortunately, five years since the Spectrum collapse many of the injured and relatives of the victims are still waiting for payments to be transferred.

The Spectrum Relief Scheme, originally scheduled to be launched in September 2006 and estimated at a total value of 533,000 Euros, was intended to provide the survivors and the families of the victims with monthly pensions. This in addition to earlier efforts to provide medical care and other types of emergency relief to the injured and the families of the deceased. For previous updates regarding the scheme, please check the box on the right of this page.

The CCC is pleased to report that in December 2008 first payments were finally made to the families of the diseased, followed by a second round of payments in June and July 2009. All payments were made by Inditex. According to the initiators, pension payments have been made at irregular intervals because the injured and families if the victims were dispersed across the the country and interbank wire transfer is at present not possible within Bangladesh.

The total amount paid to each family was between 76.000 and 78.000 Taka. This comes on top of the 100.000 Taka paid shortly after the collapse by the factory owner via the BGMEA as part of the lump sum payment section of the Scheme.

Presently 44 months of pension payments still remain outstanding to cover for the period until the end of 2009. This remainder was due to be paid in March this year, but this has not been forthcoming. The initiators hope that these payments will finally be made in the coming weeks once the Ministry of Labor and the bank have provided a long overdue authorisation.

The CCC regrets this delay, and calls upon the initiators to develop a clear methodology for this disbursement as soon as possible. It goes without saying that the families of the deceased are in urgent need of this money, which was pledged to them many years ago.

Of the seriously injured workers, 6 have received their pension entitlements up to June 2009 and should be receiving their future entitlements in line with others eligible for the pension scheme. Just like the families of the dead they lack information on the methodology of future payments. The remaining 30 injured workers have received their full payment as they are now deemed to be fit for work under the terms of the scheme.

The CCC believes that a mechanism for ensuring the outstanding payments are made swiftly and transparently is essential also  given the latest tragedies in Bangladesh where discussions regarding compensation have come up.

Health and Safety Action Points for Buyers sourcing from Bangladesh

1) Apparel buyers should press the government of Bangladesh and the BGMEA to:

a) Undertake an urgent review of all multi-story buildings currently housing garment production facilities to ensure they may be safely used for this purpose. This review should be conducted by a committee consisting of representatives from all government departments directly involved in the observance of the relevant laws and regulations, labor groups, and international buyers.

Ensure that the factory inspectorate is equipped with the necessary resources to conduct regular inspections for adherence to workplace safety and labor legislation, including Bangladesh’s National Building Code and Factory Act.

b) Such inspections must ensure that each factory:

Has a sufficient number of emergency exits and keeps such exits unlocked and unobstructed during working hours, so that workers can swiftly and safely evacuate in case of emergency and rescue and firefighting teams and equipment can quickly enter.

Meets regulations for gas lines and electrical wiring, fire retardant materials in walls and roofs, the safe use in multistory buildings of the machinery being operated, and maintenance of working public address systems, emergency lighting, and other warning and response mechanisms.

Has a professionally-developed fire emergency policy, which is tested through regular, monthly fire drills with all workers.

Has a designated manager responsible for structural and fire safety, and an adequate number of employees who are trained to respond appropriately to fires and other emergency situations.

Has well-maintained fire prevention materials and fire fighting equipment on the premises.

In the case of factories operating in buildings housing more than one enterprise, in addition to the measures outlined above, has a coordinated fire emergency policy and procedures, accessible fire fighting equipment, designated and trained personnel, and a program of regular fire drills for the entire building.

c) Issue – on a quarterly basis – a public list of all factories that do not meet the standards outlined above and revoke the export license and BGMEA membership of each factory on this list until compliance is demonstrated.

d) Set up a high-level investigative committee to conduct inquiries into accidents at factories involving worker fatalities or multiple serious injuries.  Such a committee should conduct a thorough investigation into the causes of each such incident and issue a public report of its investigation. The government should pursue all applicable criminal charges against the employer in the case of negligence.

e) Provide emergency short-term compensation and adequate disability or survivors’ benefits to the families of workers who are killed or permanently disabled because of workplace accidents.  Provide free medical treatment to workers injured in such incidents. The amount of compensation should be determined through negotiations with worker rights organisations, including the unions representing the workers.

In the case that factories are closed due to accidents or a failure to meet safety standards, ensure workers are provided income support, equivalent to their former average earnings, for the duration of the closure or, in cases where factories are closed permanently or for a extended time, a reasonable period in which to secure alternative employment.

Ensure respect for workers’ internationally recognised rights of freedom of association and collective bargaining. Trade unions can and should play a central role in promoting workplace health and safety by ensuring workers a voice in identifying and addressing hazards, and providing collective representation to workers who are injured in workplace accidents.  Government (in particular the Joint Director of Labor) and factory management should ensure the removal of all unlawful or unreasonable obstacles to the registration of factory-level unions.

2) Buyers should do the following with respect to each of their own supplier factories:

a) Conduct regular audits of factories to ensure the facilities are compliant with applicable structural and fire safety standards, including in each area discussed in item 1.C above.

b) Develop a system that includes meaningful engagement with labor groups at each stage of the audit process, including pre-audit planning, arrangements for labor groups to accompany brand representatives to observe inspections at certain facilities, and review of audit findings.

c) Notify the Bangladesh government and BGMEA when factory audits identify health and safety hazards, and publicly disclose the results of such audits.

e) Ensure respect for workers’ internationally recognised rights of freedom of association and collective bargaining. As discussed above, trade unions can and should play a central role in promoting workplace health and safety.