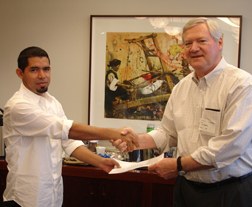 We are very happy to report that an extraordinarily positive outcome has been achieved in the case of Russell Athletic in Honduras.

Russell Athletic reached a landmark agreement with the union representing workers of Jerzees de Honduras (JDH). According to the Workers Rights Consortium (WRC), the deal represents one of the most significant advances for workplace rights in the twenty-year history of codes of conduct in the apparel industry.

Among other things, Russell agreed to open a new facility in the area, re-hire and provide substantial economic assistance to the former JDH workers and commit to a position of neutrality with respect to unionisation, which will open the door for union representation at all of Fruit of the Loom's Honduran facilities. (Russell Athletic is owned by Fruit of the Loom).

Fruit of the Loom is Honduras' largest private sector employer. It is asubsidiary of Berkshire Hathaway.

The agreement follows massive efforts by students, unions and labour-rights organisations in Honduras, the US, Canada and Europe.

Campaign work of United Students Against Sweatshops (USAS) resulted in over 90 colleges and universities severing or suspending their licensing agreements with Russell. The agreements — some yielding more than $1 million in sales — allowed Russell to put university logos on T-shirts, sweatshirts and fleeces.

The CCC collaborated with the union and the Maquila Solidarity Network (MSN) to file a complaint to the Fair Labour Association, and Labour behind the Label (the UK CCC) worked with student campaign group People and Planet to mobilise students to put pressure on Russell. One of the workers involved is visiting the UK and Spain on a CCC-organised tour for the next two weeks.

Certain aspects of these agreements are particularly noteworthy, as they include measures to protect freedom of association that are, to our knowledge, unprecedented in agreements of this type in Central America.

These include (a) union access to, and joint union-management freedom of association trainings in, all of the company's unorganised plants in Honduras, (b) employer neutrality regarding future organising efforts, and (c) mechanisms for third-party dispute resolution. Importantly, the company also has agreed to phase out existing "solidarista" employee representation systems at its non-union plants to ensure that these do not obstruct workers' exercise of freedom of association.

For additional information concerning these developments, please see yesterday's announcement by the WRC and the documents linked therein: http://www.workersrights.org/

Or MSN's update at: http://en.maquilasolidarity.org