Clean, fair, sustainable – that’s how most outdoor clothing companies present themselves. But are these companies really as responsible as their image suggests? The CCCs of Switzerland, Germany and Austria teamed up to find out. Unfortunately, the result painted quite a different picture. 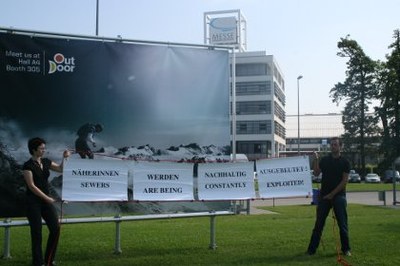 The study focused on 15 international market leaders, including Patagonia, the North Face, Columbia Sportswear, Jack Wolfskin and Mammut.  In addition, it examined 14 small and medium-sized companies that are headquartered in Switzerland.  Individually, these smaller companies don’t play as big of a role as the market leaders, but together they are an important part of the economy and their responsibility to workers is no less important.

The companies were sent a survey earlier this year with questions about transparency, codes of conduct, monitoring and verification of working conditions and production materials.  From their initial reaction to the questionnaire it was already clear how much variation exists in their understanding of supply chain responsibility.  Whereas Patagonia thanked the CCC for being included in the survey, Black Diamond claimed that it was not part of the target group.  Salewa could not determine who within the company was responsible for dealing with such a survey, while Tatonka was not interested in participating and Schöffel did not even reply.

At the time of the survey, only four of the 15 market leaders made their code of conduct publicly available by publishing it.  Of the codes that did exist, most were disappointingly weak.  The codes were not precise about limits on working hours, and only Mammut and Odlo committed themselves to paying a living wage to workers who produce their goods.

Field research conducted in parallel to the survey showed the effect of buyers’ lack of commitment to a living wage.  A worker in El Salvador received just €0.66 for a North Face jacket that sells for €116.  That’s just one half of one percent of the sales price.  To sufficiently provide for her family, she would need four times as much.

Only four companies (Helly Hansen, Mammut, Odlo and Patagonia) ensured involvement of all stakeholders, including worker representatives, in helping them implement their code of conduct by participating in a multi-stakeholder initiative.

The research showed an even more disappointing performance by smaller and medium-sized outdoor companies.  Most were surprised to even receive a questionnaire, and only now have begun to realise how far their responsibility to workers goes.

The CCCs summarised the research by placing the 29 companies in three categories.  While none of the companies obtained a “peak” rating, the CCC’s will continue to push for improvement.  In July, activists of the CCC Austria, Germany and Switzerland attended the international outdoor fair in Friedrichshafen to call on companies to take responsibility for workers. Detailed results of the study are available in German and French.