by geertjan — last modified 2013-04-24 09:51
A month before the start of the Beijing Olympics key sporting goods brands including Nike, adidas, New Balance, Umbro and Speedo are forming a ground breaking joint working group with trade unions and NGOs to explore amongst other issues how to promote trade unionism and collective bargaining as well as improving wages across the sector. 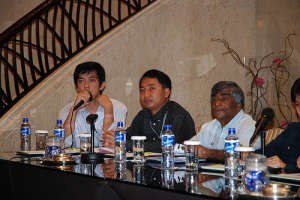 Brussels, 2 July 2008 - The joint group is charged with determining how to prioritise and incentivise union organisation, collective bargaining and social dialogue. It will seek to establish a better understanding of how business is done including on manufacturing systems; costings; productivity; and information required for effective contract bargaining and dialogue. Approaches to contract labour, closure procedures and training for managers and workers will also be developed.

The sporting goods industry is responding to repeated pressure on supplier factory conditions and demands for a living wage from the Play Fair 2008 campaign (PF08), led by the ITUC (International Trade Union Confederation), the ITGLWF (the International Textile, Garment and Leather Workers Federation) and the CCC (Clean Clothes Campaign). PF08 released a report "Clearing the Hurdles" in April this year. The report identified low wages; abuse of short-term contracts and other forms of precarious employment; violations of freedom of association; and factory closures due to industry restructuring as the four hurdles to overcome. The report and the detailed targets in the report formed the basis of a three day long conference in Hong Kong, ending today July 2nd.

Play Fair 2008 is an international campaign taking place in the lead up to the 2008 Olympic Games to push for respect for workers’ rights in the production of Olympics-related merchandise and the global sporting goods industry. To learn more about PF08 visit our website www.playfair2008.org