by geertjan — last modified 2013-04-24 15:43
On February 24 2007, Hy Vuthy, president of the Free Trade Union of Workers of the Kingdom of Cambodia (FTUWKC) at the Suntex garment factory, was shot dead while riding his motorbike home after finishing his night shift at the factory, located in Phnom Penh's Dangkao districut. The murder, less than two kilometers from the factory, was reportedly carried out by two men on a motorbike. According to preliminary investigations by local organizations, the 36-year-old union leader had received telephone death threats approximately three months ago. 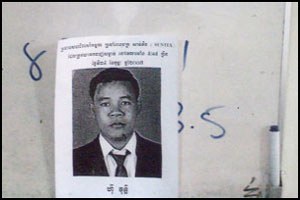 The Clean Clothes Campaign strongly condemns this killing and calls upon the Cambodian government to bring to justice those behind this and previous killings of unionists and to bring to an end the climate of inpunity that surrounds the violation of human rights in the workplace in Cambodia. The FTUWKC, local human rights organizations, the International Trade Union Confederation (ITUC) , Amnesty International, Human Rights Watch, and others have all called upon the Cambodian government to launch a thorough and independent investigation into the murder of Hy Vuthy.

Hy Vuthy is survived by his wife, Var Sopheak, a four-year-old son, and a five-month-old daughter. Serious concerns remain about the safety of his family, who are still subject to harassment. They were forced to flee their home after it was pelted with rocks and later was surrounded by a group of motorbikes. Your contributions to a support fund for Var Sopheak and her children are urgently needed.

Hy Vuthy was killed shortly after successfully negotiating a one-day holiday for Suntex workers for the Khmer New Year. The Suntex factory is owned by the Singapore-based Ocean Sky group, which reports that they produce for export, mainly to the United States for US-based brands and retailers.

In addition, Hy Vuthy's murder comes after at least five violent attacks in 2006 against FTUWKC officials at Suntex and the neighboring Bright Sky factory, also owned by Ocean Sky. They include an attack on the union's vice-president at Suntex, Chey Rithy, while he was riding home from work in May. Yen Vann Yuth, FTU member at Bright Sky, was also attacked in May. In June Lem Samrith, FTU treasurer at Bright Sky was beaten by 20 men as he left the factory after working the night shift. In July, Lay Chamroeun, FTU vice president at Suntex was attached by six men as he left work. In September, Choy Chin, the union secretary-general at Suntex, was beaten on the head by two men armed with a metal pipe. In October, a workers' strike at Bright Sky factory was violently broken up by police; one worker was shot in the stomach and an FTUWKC activist was punched in the face.

"There is a disturbing pattern of assassinations and physical assaults against FTUWKC representatives in general, and in particular against those at Suntex and Bright Sky factories," said Kek Galabru, president of the Cambodian League for the Promotion and Defense of Human Rights (LICADHO) in a statement following the latest murder. "We believe this is an orchestrated campaign of violence, intended to crush this union and frighten its members."

A three-year campaign has been ongoing to seek justice in the 2004 murder of Chea Vichea. In that case, the credibility of the Cambodian justice system has been seriously compromised by the imprisonment of two innocent men for the crime. His family and the union are appealing for the release of the two men and a new investigation and follow-up that meets international standards. For more information on this case and to sign a petition pressing the government to take positive action see.

The action request below is closed

1. Please make a contribution to help ensure the safety of Hy Vuthy's widow and young children. Funds are being gathered by French CCC platform member Reseau Solidarite for transfer to the FTUWKC for this purpose. Any amount is welcome!

I am contacting you with regard to the murder of 36-year-old Hy Vuthy, a trade union leader in Cambodia, which took place on February 24. I believe that the Cambodian government must take immediate action to launch a thorough and independent investigation into the murder.
Hy Vuthy, president of the Free Trade Union of Workers in the Kingdom of Cambodia (FTUWKC) at the Suntex garment factory, was shot dead while riding his motorbike home after finishing his night shift at the factory, located in Phnom Penh's Dangkao district.

I was very troubled to learn that Hy Vuthy is the third FTUWKC official to be assassinated in three years. Chea Vichea, the union's president, was shot dead in January 2004. Four months later, in May 2004, Ros Sovannarith, the FTUWKC president at the Trinunggal Komara factory, was similarly murdered. In addition, Hy Vuthy's murder comes after at least five violent attacks in 2006 against FTUWKC officials at Suntex and the neighboring Bright Sky factory, both owned by the Ocean Sky group.

I believe that the government must take the proper steps to ensure the rule of law in Cambodia, by bringing to justice the perpetrators of this killing, previous killings, and also by putting to an end the climate of inpunity that surrounds attacks upon defenders of human rights in the workplace.

I am also very concerned about Mr. Hy's widow, Var Sopheak, and children, who are reportedly the subject of ongoing harassment. As you will surely agree the government has a responsibility to ensure their safety. I urge you to request that the government takes step to see that these people, who have suffered such a tremendous loss, are kept safe from any harm.

I hope that without any delay you will convey my concerns to those in the Cambodian government in a position to act quickly and postively on these serious issues (including the prime minister, ministry of justice, ministry of labor, and ministry of interior).

I would appreciate it if you could contact me as soon as possible with an update on the specific actions taken by you and other Cambodian government representatives to follow up on this matter.