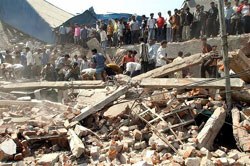 "It is heartbreaking that year after year women and men are killed while making clothes for stores in our communities," said Ineke Zeldenrust of the Clean Clothes Campaign International Secretariat, an international network that for years has highlighted the safety risks plaguing the Bangladesh garment industry. "The events of the last few days are a glaring indictment of the continued failure of industry, both locally and internationally, to ensure workplace safety. We call upon all those connected to these facilities to come forward and take reponsibility for making sure that this senseless loss of life comes to an end."

The spate of tragedies began on Thursday, February 23 when a fire, possibly caused by an electrical short circuit, destroyed the four-story KTS Textile Industriesin Bangladesh's port city of Chittagong. Initial reports stated that 54 were killed and at least 60 were injured, however other sources peg the death toll at several hundred in what local garment workers rights' advocates are calling the worst tragedy in the history of the Bangladesh garment industry. Over 1,000 workers were reportedly in the factory at the time of the 7 p.m. fire. According to the workers, the exits were locked. In 2005 two electricians reportedly died at this same facility, located in the Kalurghat Industrial Area, when they were electrocuted. This facility reportedly produced for US companies Uni Hosiery, Mermaid International, ATT Enterprise, and VIDA Enterprise Corp.Meanwhile, authorities have apparently sealed off three other factories connected to this facility (Vintex Fashion, Cardinal Fashion and Arena Fashion) citing unplanned construction and inadequate safety measures as life-threatening for their more than 6,000 workers.

Just days after the KTS fire, 19 people were reported dead and 50 injured when a five-story building collapsed in Bangladesh's capital city of Dhaka. The Phoenix Building in the Tejgaon industrial area collapsed following unauthorized renovations to convert the upper stories of the building that housed various offices and factories, including a garment factory, into a 500-bed private hospital. One hundred fifty construction workers and an as yet unreported number of garment workers were reportedly in the building Saturday morning when it collapsed. Rescue operations, hampered by lack of equipment, are still underway, as many are feared to be trapped under tons of concrete rubble. Hundreds of activists from workers' rights groups marched through Dhaka on Saturday demanding compensation for the victims families and punishment for the factory owners. Police have reportedly been searching for the building's owner Deen Mohammad, also chairman of the City Bank of Bangladesh, but have been unable to locate him. Phoenix Garments exports clothing mainly to Europe.

That same day in Chittagong, 57 workers at the Imam Group of Industries (reportedly housing the Moon Fashion Limited, Imam Fashion, Moon Textile, Leading Fashion and Bimon Inda garment factories) were injured when a transformer exploded and fearing fire, they tried to exit through a narrow exit. Four are reportedly in critical condition following the stampede.

The CCC believes that follow-up to these tragedies from local and international stakeholders must include:

In the wake of the Spectrum-Shahriyar factorycollapse in April of last year Bangladesh unions and labor rights NGOs called for structural measures to be taken to prevent similar incidents in the future.

Industry, along with public authorities (at the local and international levels) must commit to launch an immediate initiative to take on the safety issues that plague the garment industry in Bangladesh, including a structural review of multi-story buildings and facilities inspection mechanisms, explained Zeldenrust. The CCC and partners recommended in April 2005 that an independent international oversight committee/program be formed that is charged with examining occupational health and safety regulations and their implementation (including emergency regulations). In addition to addressing technical matters, workers' access to safe channels by which they can communicate their concerns on issues such as health and safety to their employers must also be addressed. The committee should be given a multi-year assignment in order to ensure that follow-up takes place on any recommendations that will be made.

There is a clear need for a long-term widescale program to address health and safety in the garment/textile sectors. The failure to implement safety measures in these sectors in Bangladesh has resulted in a conditions where the death and injury of workers has become alarmingly routine: in 2000 53 workers died at Choudury Knitwear, 24 died in 2001 at Maico Sweater, nine died in 2004 at the Misco Supermarket building, and 23 died at Shan Knitting and 64 died at the Spectrum-Shahriyar factory in 2005. The CCC, supporting this call for sector-wide improvements recently hosted several survivors of the Spectrum-Shahriyar factory during a tour of Belgium, France, the Netherlands, and Germany where they met with representatives of the factory's European clients (including French retail giant Carrefour). Outstanding demands still to be addressed by Spectrum's European clients include compensation to families of the dead and the injured, and credible mechanisms to ensure compliance with good labour standards.

On Sunday, the Bangladesh Parliament passed a bill outlining construction regulations, violation of which are punishable with fines and up to seven years imprisonment. Meanwhile, the Bangladesh Garment Manufacturers and Exporters Association (BGMEA ) convened an emergency meeting Sunday in wake of the week's tragedies and announced they would inspect all garments factories in the country within the next month to determine which units are in compliance with safety standards and other standards set by the national and international organisations.

"Inspecting factories only makes a difference when workers and their organisations are involved, otherwise auditors remain blind to the reality that workers face and are unable to draw up plans to follow-up and fix the problems in a way that's sustainable in the long term and can make a meaningful improvments," said Zeldenrust. "While some buyers have begun to take steps to systematically address conditions at their supply units, the vast majority have yet to really take sufficient concrete action to improve the dreadful situation in the workplaces where their products are made."

The CCC will continue to report on these tragedies as more information on those injured, brands producing at these facilities, and steps taken to follow up becomes available.