by geertjan — last modified 2013-04-24 09:51
On January 22 Chea Vichea, the president of the Free Trade Union of Workers of the Kingdom of Cambodia (FTUWKC), which organizes garment workers, was shot dead in Phnom Penh. The Clean Clothes Campaign (CCC) condemns this killing and deplores this use of violence to attempt to silence the movement for workers' rights in Cambodia. We call upon our network members to demand immediate action from the Cambodian government to investigate this murder and bring Vichea's killers and those behind the killing to justice. 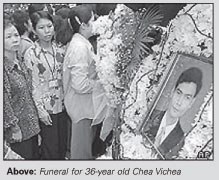 Chea Vichea, 36, outspoken leader of the Free Trade Union of Workers of the Kingdom of Cambodia (FTUWKC) was shot in the head and chest while reading a newspaper at a busy kiosk in Phnom Penh. He died on the spot of his wounds after his assailants fled the scene on a motorcycle. He is survived by his wife, who is seven months pregnant, and a three-year-old daughter.

Vichea was also a founding member of the opposition Sam Rainsy party (Cambodia's main opposition party). He eventually left the party to focus on his union work but maintained close links with the party, which strongly criticizes the current Hun Sen government. In recent weeks three other members of the opposition have been murdered in Cambodia. While the circumstances and motives of Vichea's assassination have yet to be fully investigated, indications suggest that the killing was politically motivated.

On January 25th Buddhist monks headed up a procession of some 10,000 people, many of them garment workers, that accompanied Vichea's coffin from the union headquarters to the cremation site, a public park outside the royal temple Wat Botum.

"He did a lot of work defending the rights of garment workers and this incident is an attempt to threaten those who protect those rights," Kem Sokha, head of the Cambodian Centre for Human Rights, told reporters.

"Chea Vichea was one of the best-known and most outspoken voices for workers in Cambodia" said Sara Colm, senior researcher with Human Rights Watch's Asia division. This assassination will surely exacerbate the climate of fear for workers, journalists, environment and human rights activists who speak out or publicly demonstrate to express their views.'

The International Confederation of Free Trade Unions (ICFTU) immediately condemned the killing and filed an official complaint with the International Labor Organization (ILO).

The ICFTU reports that according to numerous sources Vichea had received several death threats, notably one that was received on or around July 27, 2003, when national elections were held in Cambodia (note that during the run-up to that election 13 political party activists were murdered). The ICFTU is currently investigating the nature and origins of this specific death threat, which was sent to him by way of a text message on his cell phone and reportedly stated that he should be 'killed like a dog.' The ICFTU received a report that Vichea had succeeded in identifying the origin of this threat, and as a result went into hiding a number of times. He was also reportedly denied police protection in connection with these threats.

Vichea had won an appeal court case in September 2003 against the head of security at the Vinstar garment factory, who had physically attacked Vichea when he was distributing leaflets inviting workers to a rally celebrating Labour Day on May 1st of that year, according to the ICFTU.

ICFTU also reports that in April 2003, the FTUWKC lodged a complaint with the Committee on Freedom of Association of the International Labour Organisation (ILO), in which it indicated that Vichea, as well as the general secretary and 30 other members of the FTUWKC had been dismissed by the INSM Garment Factory (located in the Chum Chao District of Phnom Penh), as a reprisal for helping to establish a trade union at that company. In the wake of Vichea's killing, other FTUWKC members have reportedly received threats and been pressured to join other (pro-government) unions. The woman who owns the kiosk where Vichea was shot said she fears for her life and has requested protection from human rights groups and the United Nations.

Two men were arrested on January 28 in connection with Vichea's murder; one has denied involvement in the murder and the other has reportedly confessed. However, opposition leader Sam Rainsy said he does not believe the men were involved in the slaying and criticized the police handling of the case. On February 1 the Phnom Penh police said they were seeking a third man in connection with the murder. The FTUWKC has appealed to the international community to take action in response to the murder, requesting that people contact the Han Sen government to demand an impartial investigation into the killing, and the arrest of Vichea's real killers and those who organized the killing.